DTMA participates in One Acre Fund field day in Kenya 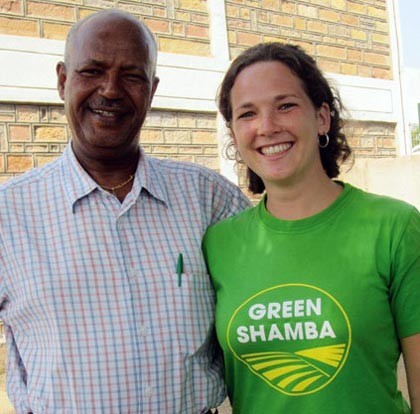 On 12 June 2012, the Drought Tolerant Maize in Africa (DTMA) project leader, Tsedeke Abate, led a group from CIMMYT in a farmer field day organized by the non-governmental organization “One Acre Fund” in Kendu Bay, Nyanza Province, Kenya. The event brought together 90 participants including farmers, seed companies, research organizations, and government representatives from the local agricultural office and administration. The organization invited the different stakeholders to participate in the event and give feedback on the crops on the farm, including maize, sorghum, beans, cowpeas, chick peas, and pigeon peas.

Kendra Levine, One Acre Fund’s program manager, indicated that they were keen on picking the best varieties for their farmers and it was beneficial to have the different stakeholders participate in the field day “and get their input on what we can do for the next rainfall season.”

Drought tolerant maize varieties KDV1, KDV2, KDV4 were on the demonstration farm. These benefit farmers, many of whom are experiencing climate change-induced drought, as they can tolerate drought stress but also thrive in optimal conditions. Ibrahim Siundu, a representative of Dryland Seed Company, encouraged farmers to plant crops that would mature within a short period and drought tolerant maize varieties.

“Our responsibility is to show that there are options,” said Tsedeke Abate, explaining the role of research institutions such as CIMMYT in availing suitable seed to farmers.

Most farmers present were women and older people. A student on attachment at the local agriculture office challenged the youth to be more actively involved in farming. “Let us go back to the farm and help our parents,” he urged his peers.

The main message from stakeholders was that in working together in the field of agriculture, farmers can make tangible steps in contributing to food security in the country, particularly in the scenario of changing climates.

CIMMYT strengthens links with seed companies in Uganda and Kenya