Last week, the Drought Tolerant Maize in Africa (DTMA) Project hosted gender consultant Diana Pritchard in Ethiopia and Kenya. In Ethiopia, Diana met with CIMMYT project staff. In Kenya, she attended a field day hosted by One Acre Farm in Kendu Bay in Nyanza Province. She also visited the Kenya Agricultural Research Institute (KARI) Katumani Station, Dryland Seeds Limited, and four farmer groups in Machakos and Makueni Districts in Kenya’s Eastern Province. Diana has been contracted to give recommendations on what DTMA can do to mainstream a focus on gender through the project activities carried out by CIMMYT and its partners. In making the project gender friendly, she will advise the project on how to ensure its activities and those of partners enhance women’s livelihoods and, in turn, contribute to their empowerment without impacting negatively on them. 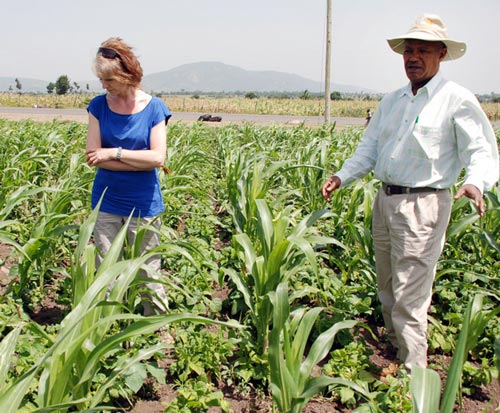 While highlighting that the work she was doing was still ongoing, Diana pointed out key strengths of the DTMA project from her assessment. “DTMA and all project personnel recognize the need to do this because it is generally acknowledged that approximately 70 percent of agricultural labor in sub-Saharan countries is provided by women,” says Diana. “Since women also play a central role in the welfare of household members and the community, understanding how drought tolerant technologies affect them is crucial to defining the impact of DTMA on poor farmers. Amongst many of the research counterparts, both public and private, there is recognition of the significance of women in agricultural systems,” she observes.

Diana indicates that there is a qualitative difference between ‘sex differentiated’ data and gender aggregated data. Whereas the former establishes the existence of differences, for example, in variety preference of men and women or different adoption rates, it is important to go beyond this differentiation and to establish why this may be the case. This involves examining the underlying issues of different access that men and women have to resources (cash and assets).

So what exactly is gender analysis? “In carrying out gender analysis, one looks at power relationships within households with regards to men, women, children and the elderly in a bid to identify and explain the reasons why there are different responses to technological adoption and how different technologies may impact on different groups.” In turn, this requires adopting methods which enable researchers to effectively identify the specific challenges and constraints that bar women from greater access to assets and resources and that inhibit them from generating income through farming. Various methods, including focus groups, participatory and action research may all have a role to ensure that research findings accurately reflect women’s realities, their perspectives and interests. In this way, such qualitative methods can complement quantitative data and provide meaningful interpretations of the data which reflect the realities of poor women. This is crucial if DTMA technologies are to effectively reach women and to shape more effective project interventions.

The gender consultant identified different obstacles at different levels. “Women face many obstacles such as cultural constraints which influence their access to resources,” says Diana. “These cultural norms inhibit their more active participation or ability to demand for greater control in decision making and resources,” she elaborates further. Cultural norms may also become institutionalized and can result in women having limited access to financial resources, credit and important inputs which impact on their potential to produce good yields and secure food for rural households.

In her interactions with the various farmer groups which consisted mainly of women farmers, Diana learned about what they gained from organizing themselves in order to overcome the challenges they all face. They said that working as a group provided them an opportunity to gain more agricultural knowledge from their peers and extension workers. It also allowed them to pool together their limited labor resources to till the land, plant, weed, harvest and build terraces. “Women are organizing across the continent to try and overcome their limitations,” says Diana. She also noted that CIMMYT, through the DTMA project and its partners, both in public institutions and private enterprises are engaging this segment of the farming population in different ways.

Two decades since her last visit to Kenya, Diana was struck at the modified landscape of the country, reflecting the increase in the country’s booming population and the intensification of agriculture and particularly the widespread use of terracing: agricultural practices adopted to retain soil and conserve moisture.

Once the assignment is complete, Diana will share a complete report with the DTMA project staff.