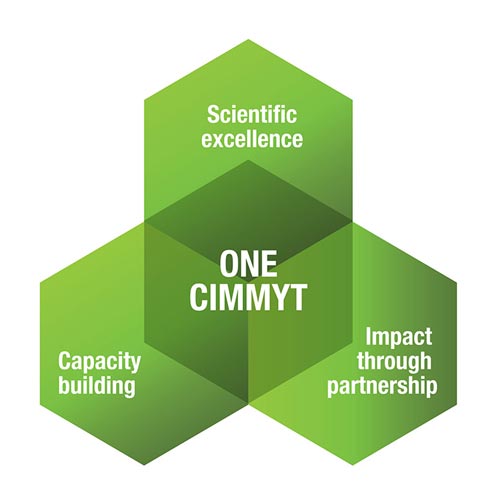 After meeting 250 staff, partners and Board of Trustee members from around the world at Science Week 2015 and observing the organization in Mexico and several offices abroad, Kropff began initiating processes to frame a new strategy.

Globally, US$ 2.1 billion to US$ 5.7 billion are attributed annually to CGIAR wheat improvement. Thanks to CIMMYT support, 52,000 tons of drought tolerant maize seed were released in Africa in 2014. Kropff witnessed the work behind these impacts directly through his first 100 days of travel in China, India and Pakistan. In addition, he witnessed CIMMYT’s partnership with Australia at the International Wheat Conference and MasAgro’s success in collaborating with seed companies and farmers throughout Mexico.

“Institutional changes and strengthening internal processes will be key to realizing the success of our mission and fundraising goals to foster a healthy organizational culture,” Kropff stated during the talk.

Kropff emphasized that cuts in funding to CGIAR Research Programs are affecting all centers. “We must be more innovative, efficient, and donor-savvy than ever before,” he said. “The attention to food production that came after the 2008 food price crisis has shifted now to climate change, nutrition, and the refugee crisis. In response, a fundraising strategy for large initiatives will be implemented, targeting new donors and ways to reach them.

Kropff has been working with a team and management committee on a new strategy that will soon be finalized. “One CIMMYT’s” unifying vision and mission will emphasize scientific excellence, capacity building, and impact through partnerships. “In addition to getting better varieties to farmers faster,” Kropff said, “we are proposing the creation of a ‘CIMMYT Academy’ to consolidate training and capacity-building and bring in added research contributions from Ph.D. students of universities worldwide.”

He assured staff that CIMMYT would continue to adapt and foster innovative thinking to realize its vision of research-for-development on maize and wheat agrifood systems, thereby contributing to a world with less poverty, healthier and more prosperous people, more resilient ecosystems, and fewer global food crises.

W4A Day Three: The real world of wheat in Ethiopia