The training was preceded by a brainstorming session to deliberate the design of the Long-term Research on Conservation Agriculture (CA) at three BISA sites. The session covered critical issues in major production systems, soil types, and agro-ecologies, and identified and prioritized future production systems for long-term CA trials. Component technologies and design protocols of long-term trials were discussed and finalized.

During the actual training, Cairns introduced the EM 38, the non-invasive, nondestructive, quick, and inexpensive sampling method using electromagnetic induction to measure salinity, moisture, and other characteristics of soil. Cairns then described the steps in EM 38 calibration, and the team worked on EM 38 surveys at a BISA farm in Ladowal. Participants were exposed to application of EM 38 in mapping spatial variation in fields with long-term and other trials and learned to generate maps from collected data. At the end of the session, maps generated by participants were presented and described, which was followed by a Q&A session. 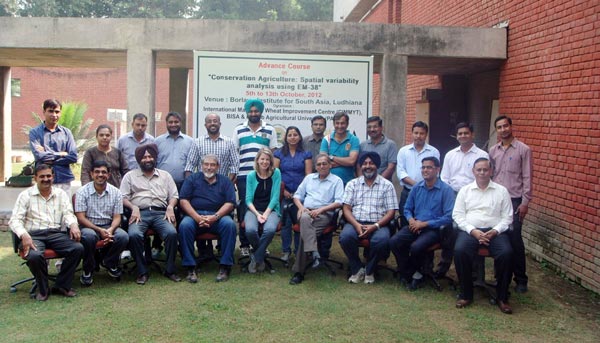