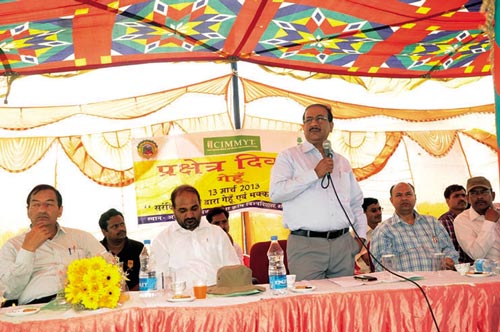 CIMMYT senior cropping system agronomist ML Jat highlighted the key CA-based crop management technologies currently being developed and adapted under the IFAD project. “These technologies are contributing to sustainable intensification in smallholder rainfed systems of Jharkhand,” explained Jat, as a range of relevant CA machinery was demonstrated to the participants. “CA-based management technologies have shown a tremendous potential for arresting land degradation,” noted Pandey during the field interactions. “Integrating genotypes and management practices is the way towards sustainable intensification of Jharkhand farming, as the cropping intensity in the state is merely 115%,” he added. Watching the demonstrations and hearing about farmers’ experiences, AK Singh was impressed with the CAbased crop management technologies and their relevance to Jharkhand farmers. He appreciated CIMMYT’s efforts in this area and noted that it is necessary to “establish more public-private partnerships to disseminate the technologies for the benefit of their end-users.” He then stated that it would be great to “see the collaborative work between the State Agriculture Department, SAMETI, Agriculture Technology Management Agency (ATMA), and CIMMYT to be replicated in 500 villages of Jharkhand.” 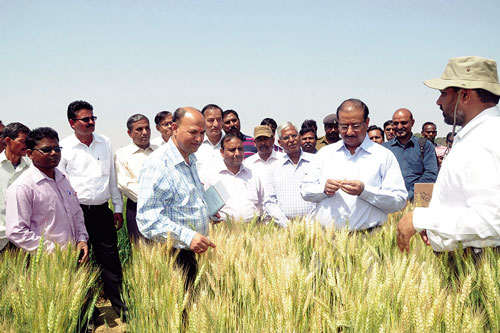 The project aims to conduct farmer participatory trials to eventually achieve mass adoption in the villages of Jharkhand. As the awareness of the project’s successes increases, so does the demand for CA technology. “Local machine manufacturers are encouraged to come forward to assemble and fabricate CA machines adapted to local farmers’ needs,” AK Singh reassured the participants. Further assurance on efficient dissemination of the knowledge and technology among farmers was provided by Chaudhary: “SAMETI utilizes a strong grassroots network of ATMA at district and block levels.” Recognizing the potential of CIMMYT and its dedication to the case, Chaudhary expressed his wish to work more closely with CIMMYT: “With your expertise, we could more efficiently train district and block levels agricultural official s and extension agents, and thus contribute towards state level extension mechanism enrichment.”

The field day, organized and attended by experts on diverse subjects willing to share their expertise, managed to bring about extensive promotion of CA-based methods.