Celebrating 50 years of collaboration: CIMMYT in the Mexican senate 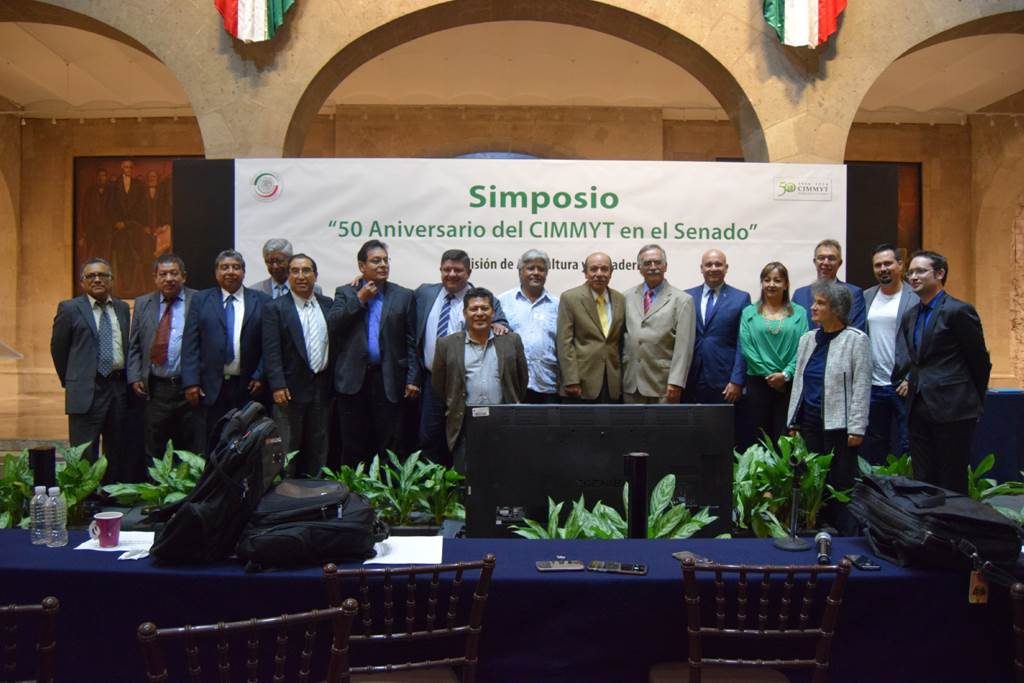 Mexico City, Mexico (CIMMYT) — In recognition of the contributions the International Maize and Wheat Improvement Center has made to agriculture and food security in Mexico and the world, a symposium was held 13th September at the Mexican Senate. Organized by the senate’s commission on agriculture and livestock, the symposium “50 years of CIMMYT in the Senate,” marked five decades of invaluable collaboration between the Center and the Mexican government.

CIMMYT was founded in Mexico in 1966 with the aim of improving food and nutritional security around the world. In the past 50 years, the agricultural research breakthroughs made by the Center and its scientists have produced nutritious and stress tolerant maize and wheat that has improved the lives and livelihoods of smallholder farmers and consumers around the world. None of these achievements would have been possible without the support of the Mexican Government, beginning with former president Adolfo Lopez Mateos’ support of the fledgling Center upon its founding and extending into the present day with cutting edge projects working to bring novel solutions to the challenges faced by Mexican agriculture.

“We are here today celebrating our 50th anniversary thanks to the leadership, vision and support of the Mexican people and their government that have allowed us to make this beautiful country our home,” said Martin Kropff, Director General of CIMMYT.

CIMMYT’s work has had incredible impact on the society and economies of Mexico and the world. “Around 50 percent of modern maize and wheat varieties planted around the world are descended from lines developed by CIMMYT,” Kropff announced. “Each year, these varieties generate between three and four billion dollars in profits for the farmers that grow them around the world.”

Kropff also recognized the important role that the Mexican government and other CIMMYT partners and allies, especially Mexico’s National Forestry, Agricultural and Livestock Research Institute (INIFAP), have played in this success. Fernando Flores Lui, Director General of INIFAP, referred to CIMMYT as a “pillar in the development of improved maize and wheat for the world,” and that their collaboration with the Center constitutes a “new model of collaboration based on equity and mutual support.” 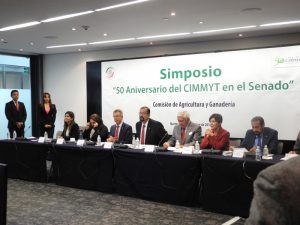 In his welcome address to the symposium, Senator Manuel Cota Jiménez, president of the Mexican senate’s commission on agriculture and livestock, recognized the longstanding collaboration between CIMMYT and the Mexican government. “CIMMYT 50 marks a year for celebration, but also a year of challenges. CIMMYT has long worked to overcome the greatest challenges of agriculture in Mexico, it is our duty to continue working to ensure that our laws and public policies are in line with our goals for Mexican farmers and agriculture,” he said. “The countryside cannot remain isolated from science.”

One of the most fruitful examples of the success of this collaboration and partnership between CIMMYT and the Mexican government is the Sustainable Modernization of the Traditional Agriculture (MasAgro) project. A joint initiative of CIMMYT and Mexico’s Secretary of Agriculture, Livestock, Rural Development, Fisheries and Food (SAGARPA), MasAgro has developed 11 improved wheat varieties and over 40 improved maize varieties for the benefit of Mexican farmers.

In his keynote address, Bram Govaerts, director of MasAgro and CIMMYT’s regional representative in Latin America, presented on the project’s achievements over the past six years. A study from the University of Chapingo has shown that technicians who participate in the MasAgro project are nine times more efficient in their technical support to farmers than technicians who do not participate in the project. For the same amount of money invested, technicians using the MasAgro model reach nine times more farmers.

Govaerts also emphasized the importance of focusing on and supporting farmers in all components of agriculture to achieve the best results. “Planting improved seeds without agronomy is like trying to drive a racecar down a dirt road,” he said. 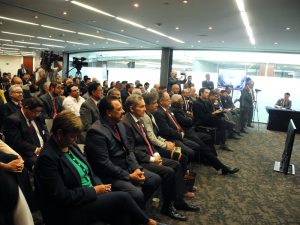 This support of the Mexican government will be equally crucial in the next 50 years if CIMMYT is to continue in its mission of improving food security and farmer livelihoods across the world. The relationship of collaboration and partnership between CIMMYT and the Mexican senate was strengthened and renewed through the open dialogue of the symposium, paving the way to implement the solutions necessary to ensure that improved maize and wheat varieties will be available not only to improve the lives and livelihoods of Mexican farmers, but to protect smallholder farmers and food security around the world.

“We still have so much left to accomplish, and that is why it is so important that we can count on the support of the legislators present today to maintain the budget for agricultural research and development,” Kropff said in his keynote address. “That is the objective of this symposium—to find solutions to the problems we face today and overcome them to achieve a food secure future for the Mexican people.”

The symposium was followed by a round table on maize and wheat improvement, agronomy and extension services held at the historic Casona de Xicoténcatl, the former headquarters of the Mexican senate. Over 30 researchers from CIMMYT and INIFAP participated in the event, as well as various representatives from different sectors of maize and wheat value chains in Mexico.

CIMMYT was honored by the attendance of Sanjaya Rajaram, 2014 World Food Prize laureate and keynote speaker at the symposium, and other distinguished guests including members of the Mexican senate’s commission on agriculture and livestock, senators María Hilaria Domínguez Arvizu, Silvia Garza Galván, Salvador López Brito and Adolfo Romero Lainas, as well as Patricia Ornelas Ruiz, director of the agrifood and fisheries information service (SIAP). The rectors of several Mexican agricultural universities also participated in the symposium, including Jesús Moncada de la Fuente of the Colegio de Posgraduados, Sergio Barrales Domínguez of the University of Chapingo and Jesús Valenzuela García of the Universidad Autónoma Agraria Antonio Narro. Representatives of various farmer groups and Mexican seed companies were also in attendance. 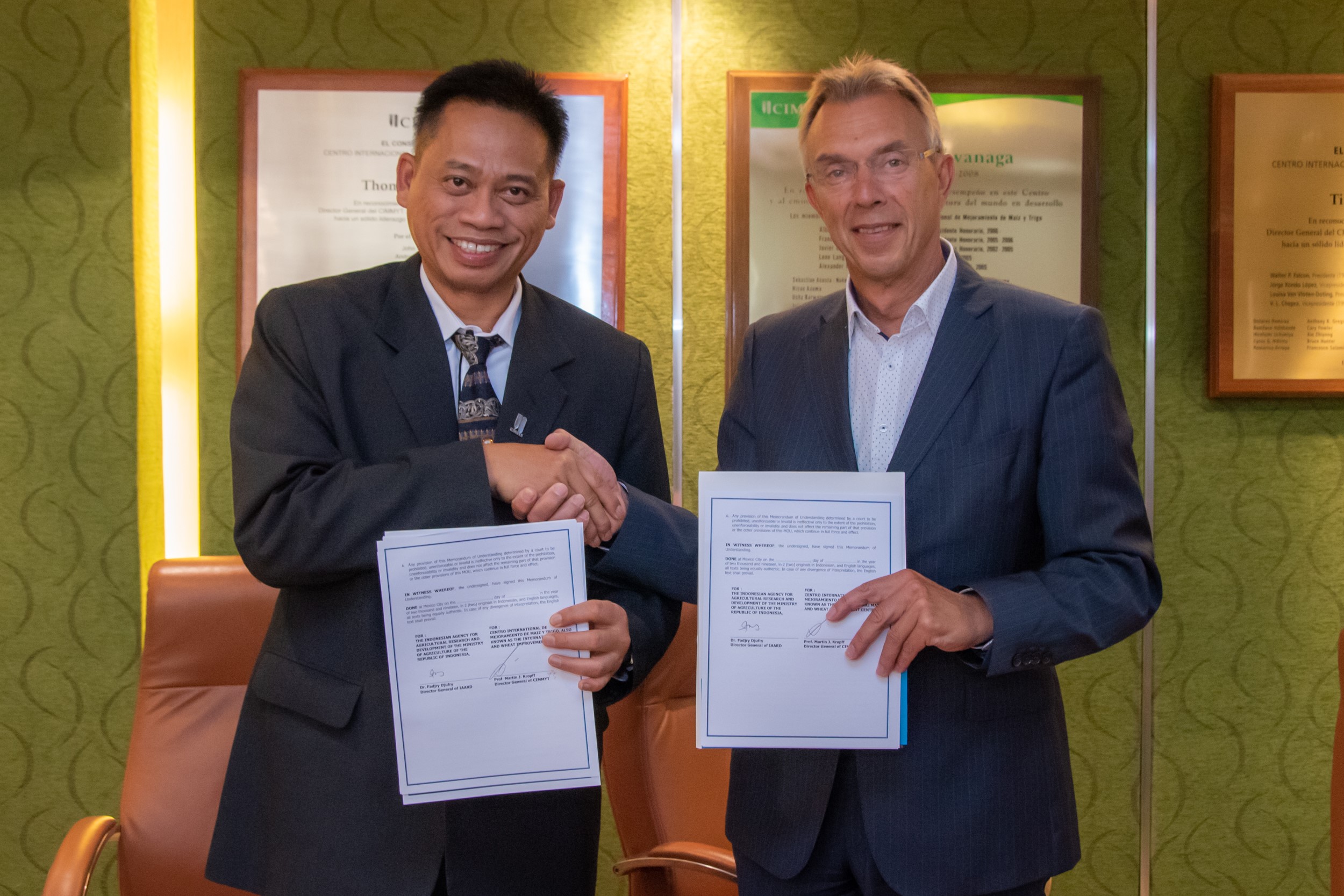