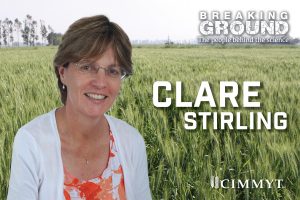 There are no easy fixes nor can business as usual continue, if humankind is to reduce the climate footprint of global agriculture while intensifying farming to meet rising food demands, according to an international scientist who has studied agriculture and climate interactions for nearly three decades.

“Climate change is a threat multiplier, intensifying the challenges of population growth, food insecurity, poverty, and malnutrition,” said Clare Stirling, a scientist in the sustainable intensification program of the International Maize and Wheat Improvement Center (CIMMYT). “With almost 60% of global food production coming from rainfed agriculture and more than 650 million people dependent on rainfed farming in Africa alone, our food system is already highly vulnerable to changing climates.”

Stirling, who is CIMMYT’s liaison with the CGIAR Research Program on Climate Change, Agriculture and Food Security (CCAFS), believes that agriculture—including smallholder agriculture—can play a key role in meeting greenhouse gas emission targets, but only with combined and coordinated efforts that cross institutional and disciplinary boundaries.

CIMMYT contributes through a systems approach to developing and promoting climate smart technologies—including drought tolerant maize and wheat varieties, conservation agriculture, and precision nutrient and water management—as well as research on climate services, index-based insurance for farmers whose crops are damaged by bad weather, and data and models for greenhouse gas emissions in India and Mexico.

“Take the case of India, the world’s second-largest food producer,” Stirling explained. “Mitigation options for crops, of which rice-wheat systems are a major component, include improved water management in rice, more precise use of nitrogen fertilizer, preventing the burning of crop residues and promoting zero or reduced tillage, depending on local conditions and practices. With the right policies and training for farmers, these options could spread quickly to reduce emissions by as much as 130 Megatons of CO2e per year from the crop sector alone. The big challenge is achieving large-scale adoption for significant mitigation to occur.”

Born in Malawi and having spent her early childhood in Zimbabwe, young Stirling also lived a year with her parents and siblings in a house trailer on a farm in Devon, United Kingdom. “Most of my childhood and teen years were spent living in villages, riding horses, and working on farms during school holidays. Out of this came a desire to work in agriculture and overseas.”

Stirling obtained a bachelor’s degree in plant science and a doctor’s degree in environmental crop physiology at Sutton Bonnington, University of Nottingham, U.K., performing fieldwork for the latter at the International Crops Research Institute for the Semi-Arid Tropics (ICRISAT) in Hyderbad, India.

As a Ph.D. student at Nottingham, she also joined a research group under the late Professor John Monteith that was quantifying relationships among crop growth, radiation, and water use. The resulting equations underpin many of today’s crop simulation models. “My research since has focused on environmental interactions and crop growth, so climate change became an important part of this, starting with an M.Sc. course on the topic that I set up in Essex University in the 1990s.”

Among the intractable challenges Stirling sees is soil degradation. “Unless this is addressed, it will be impossible to sustainably intensify or build climate resilience into food systems,” she explained. “We must manage limited organic matter and fertilisers better and more efficiently, to achieve healthier soils.”

She is also concerned that the climate science to support national and local climate change adaptation planning is much less certain than that which informs long-term global scale targets. “CIMMYT has an invaluable role with its global and strategic research mandate to develop technologies that will raise productivity and resource use efficiency in future, warmer climates,” Stirling asserted.

“Local climate predictions are likely to remain uncertain and adapting to current climate variability may not be enough for long-term adaptation in many places, with the surprises that may be in store,” Stirling added.

“International organizations such as CIMMYT need to offer stress-tolerant, high-yielding germplasm and sustainable management systems, as well as harnessing big data and digitization, to transform adaptation to deal with future, more extreme climates. Finally, future farmers will need to get the most out of good conditions and good years because, the way things are headed, there may be little hope for coping in bad years.”

Read about research by Stirling and colleagues: