Young Indonesian researchers are reaping the benefits of collaboration with CIMMYT and at the same time helping farmers in their country.

It could be a biotech laboratory almost anywhere in the world, but this one is the Indonesian Center for Agriculture Biotechnology and Genetic Resources Research and Development in Bogor, Indonesia. What makes it remarkable is that just ten years ago Indonesia had virtually no agricultural biotechnology capacity at all. At the lab benches, in standard issue white lab coats, two of Indonesia’s brightest students, each with a strong commitment to helping their country, are doing the painstaking work that molecular biology requires and their PhD supervisors demand.

Marcia Pabendon is doing a maize diversity study, using DNA fingerprinting to identify maize germplasm from diverse sources to use as parents in a breeding program to find resistance for downy mildew and drought tolerance. These are the two most serious production constraints for maize in Indonesia, where half of all maize is grown in dry land areas. By analyzing the DNA she can be sure male and female parents in the breeding program are not closely related, which is detrimental to the hybrids. 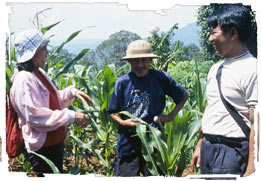 “This is the untold story of the quiet biotech revolution going on in maize breeding in Asia,” says CIMMYT’s Luz George. “It is a successful transfer of technology from CIMMYT to developing countries which has now found direct application in the work of national program maize breeders.”

It began with the Asian Maize Biotechnology Network, AMBIONET, which was funded by the Asian Development Bank and which George coordinated. K.R. Surtrisno, the Director of the biotech center in Bogor, says the capacity enhancement the network provided was vitally important. “The network has given us, through CIMMYT, genotype data and training in mapping. Now the government of Indonesia has made a commitment to support and improve our facility, just in time to do useful work for farmers.”

His thoughts are echoed by Marsum Dahlan, the head of the Breeding and Germplasm section of the Indonesian Cereals Research institute. “When AMBIONET came we thought not only to help farmers but also to create capacity,” he says. “This technology will help us, though we must still combine it with tests in the field.”

AMBIONET and the work with CIMMYT have proven very valuable to agricultural biotechnology in Indonesia. “Even though the AMBIONET program is over, we still maintain collaboration with CIMMYT,” says Surtrisno. That is good news for Indonesia and good news for promising young researchers like Mohamed and Marcia.