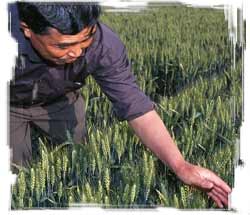 Global, collaborative wheat research brings enormous gains for developing country farmers, particularly in more marginal environments, according to an article in the Centenary Review of the Journal of Agricultural Science.

Forty years of worldwide, publicly-funded collaborative research to improve the yield potential and stress tolerance of wheat, along with efforts to extend the outputs of this science in developing countries, has lowered food costs for the poor, allowed food supplies to meet the demands of rising populations, brought harvest surpluses worth US$ 3-6 billion each year to farmers, and saved 1.8 billion hectares of natural ecosystems from conversion to farmland, to name a few results.

These and other findings appear in a recent review article by CIMMYT wheat physiologist Matthew Reynolds and 1970 Nobel Peace Laureate Norman E. Borlaug—one of a series of papers to celebrate 100 years of publishing by the Journal of Agricultural Science. The review traces how international wheat breeding over the last five decades has evolved into “…a global agricultural strategic and trouble-shooting network that plays a central role in providing food security in the developing world.” Led initially by CIMMYT and later with the partnership of the International Centre for Agricultural Research in the Dry Areas (ICARDA), the network for wheat and related crops provides a forum “…whereby institutional linkages are fostered and maintained globally, not only through exchange of germplasm, but also through knowledge sharing, training programmes, international visits and development of extended partnerships…” According to the article, centers like CIMMYT and ICARDA have also played a key role in collecting and conserving the landraces and other genetic resources that improved varieties have replaced, making those resources available worldwide and, more recently, ensuring that useful diversity is rechanneled into improved cultivars.

“Given its importance and accomplishments, it’s somewhat surprising that global wheat breeding struggles to find investors,” says Reynolds. Also noted by Reynolds and Borlaug was the fact that most of the increased area of adoption of improved wheat varieties since 1977 has occurred in more marginal, rainfed areas, rather than favored irrigated farmlands, and that yield increases from these varieties during 1979-95 were greater in semi-arid and heat-stressed environments (2-3% per year) than in irrigated areas (just over 1% per year).

“Considering the issue of food security and its positive influence on the livelihoods of poor people, it’s clear that publicly-funded international centers provide a continuity in agricultural development that would otherwise be lacking for many countries where economic, political, and social instability are commonplace,” the authors say.

A companion Centenary Review by Reynolds and Borlaug discusses the future of collaborative wheat improvement, in which, according to Reynolds, researchers will apply technology-assisted methodologies and powerful information tools to identify and breed value-added traits into wheat varieties. “At the same time, however, we’ll continue to seek farmer input to increase the amount of useful genetic diversity in the field and the local adaptation of varieties, as well as in testing and promoting conservation agriculture practices.”

Regarding the future, the authors say: “Policy-makers need to balance the appeal of high-risk investments in the latest technologies with the realities of resource-poor farmers, for whom tried and tested technologies offer immediate and reliable solutions.”

To access abstracts or full-text versions of the articles: