Unless global policymakers redouble their efforts to properly support a strategy to ensure a future food supply, the current hunger crisis threatens only to get worse. 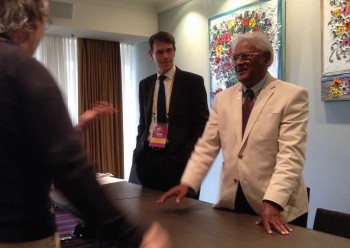 Sanjaya Rajaram is the 2014 World Food Prize laureate for scientific research that led to an increase in world wheat production by more than 200 million tons. Any views expressed are his own.

Unless global policymakers redouble their efforts to properly support a strategy to ensure a future food supply, the current hunger crisis threatens only to get worse.

A gathering of more than 500 scientists at the 2015 International Wheat Conference in Sydney, Australia, provides an opportunity to revisit these matters.

Already almost 800 million people worldwide – about one in nine people – are undernourished and do not get enough food to eat to lead a healthy active life, according to the U.N. Food and Agriculture Organization (FAO).

By 2050, the current global population of 7.3 billion is projected to grow 33 percent to almost 10 billion, according to the United Nations.

A recent report from the Taskforce on Extreme Weather and Global Food System Resilience projects that food demand, driven by population growth, demographic changes and increasing global wealth, will rise more than 60 percent.

The majority of hungry people live in developing countries where almost 14 percent of the population is undernourished, the FAO states in its 2015 “State of Food Insecurity in the World” report. The current refugee crisis in Europe provides dramatic evidence that wealthy countries must increase investments that will help promote food security and political stability in poor countries.

Investments in agricultural science must be at the top of the list. Wheat currently provides 20 percent of calories and 20 percent of protein to the global human diet. In order to keep up with population growth, we must increase wheat production from the current annual 700 million metric tons a year to 1 billion. We also face the threat of climate change-related global warming.

Over the past 50 years, the 15-member CGIAR consortium of agricultural researchers – where I worked for most of my career with the International Maize and Wheat Improvement Center (CIMMYT) and the International Center for Agricultural Research in the Dry Areas (ICARDA) – have been helping smallholder farmers to increase crop yields and stave off devastating diseases.

To date, however, scientists have been unable to sufficiently increase yields to meet demand through hybridization. Production must grow 70 percent over the next 35 years – an achievable goal if annual wheat yields are increased from a current level of below 1 percent to at least 1.7 percent. It is time to invest in biotechnology to ensure yields can provide nourishment for an ever-hungrier planet.

Simultaneously, we must maintain balance in the food chain and restore depleted carbon in the soil. Such concerns as disease resilience, seed diversity, water management and micronutrient imbalance must be tackled.

Will yield increases continue to feed the world? The case for wheat

Wheat, being produced equally in developing and developed countries, is the top global source of calories and the top traded food grain, a position it is unlikely to lose.