Zero-tillage a winner for winter wheat in Turkey 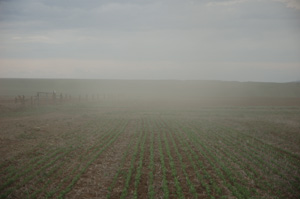 Zero-tillage trials in rainfed, winter wheat-fallow systems show smallholder farmers on the Anatolian Plains a way to double their harvests.

Muzzafer Avci is an agronomist with the Central Field Crops Research Institute of the Turkish Ministry of Agriculture. In recent years he has been working with CIMMYT wheat agronomist, Ken Sayre, and over time has become an advocate of zero-tillage—the direct seeding of a crop into the residues of a previous crop, without plowing—for rainfed winter wheat, a key crop for small-scale farmers on the Anatolian Plateau. On this day, he completes a drought impact forecast for the Ministry and drives the three hours east of Ankarato to the Ilci Cicekdagi farm, where the Royal Netherlands Embassy in Turkey has funded zero-tillage trials.

On the Anatolian Plateau, farms are typically less than 10 hectares in size. Wheat farmers obtain just a single harvest every second season from each field. Sowing takes place in autumn before the onset of winter. The wheat germinates quickly, lies dormant over the winter, and matures the following summer. After harvest the field is left fallow for a year before being sown to wheat again. During the fallow, farmers plow the weeds under two or three times. Even with the long fallow, which one would suppose helps conserve or improve soil fertility, typical wheat harvests on these farms reach only 2 tons per hectare, far below the crop’s genetic potential. Once highly productive, the winter wheat farming system has become more and more dependent on fertilizer as soils degrade, making it unsustainable. 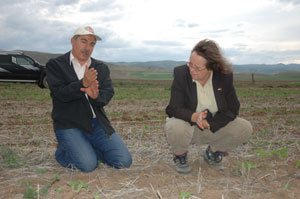 A former state farm that was recently privatized, the Ilci Cicekdagi farm is not typical. It comprises 1,700 hectares and supports modern, diversified farming involving dairy and beef cattle, sheep, and many crops, among them wheat. The farm owner and managers believe they have a responsibility to assist less well-endowed, smallholder farmers in the area. So they hold demonstrations and field days for the local community. Farm manager Nedim Tabak says he hopes the farm will be a model for local farmers. He is proud of his zero-tillage trials and shows them off to Avci and to Carla Konsten, Agricultural Counselor from the Royal Netherlands Embassy in Ankara. The Netherlands, Canada, and Australia have funded pilot zero-tillage work in Turkey for the past two years and representatives of those countries’ funding agencies are pleased with the result. “This technology will clearly benefit farmers on the Anatolian Plateau,” says Avci, who learned about zero-tillage first-hand at a CIMMYT course on the topic. 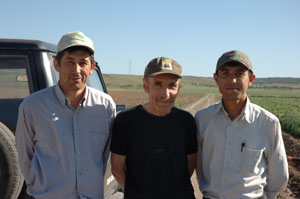 Retired agronomist Mufit Kalayci, recently brought back to the Anatolian Agricultural Research Center in Eskisiher, Turkey, to mentor a new team, sees the value of zero-tillage in intensive, irrigated systems with more than a single crop per year, but is skeptical about using it with traditional rainfed wheat farms. “I don’t think you can retain enough moisture over the fallow period.” he says. For that reason, one of the goals of the zero-tillage experiment was to see if a second crop other than weeds could be grown during the fallow season. This question will be answered in coming years.

Of course, use of zero-tillage and retaining crop residues on the soil do more than simply capture and hold soil moisture. The practices reduce production costs and diesel fuel burning, and help prevent topsoil erosion from the strong winds that often sweep the Plateau during fallow. The elimination of repeated tillage to bury weeds also helps retain soil structure, aiding aeration and water filtration. The zero-tillage trials have obtained demonstration yields of more than 4 tons per hectare—double what farmers currently get.

Farm manager Tabak says his trials were sown late for lack of timely access to a zero-tillage seeder. He is planning to modify one of the seeders on the farm for next season. Already some local farmers have looked at his test plots and said they will try zero-tillage too next season.

Wheat warriors: The struggle to break the yield barrier