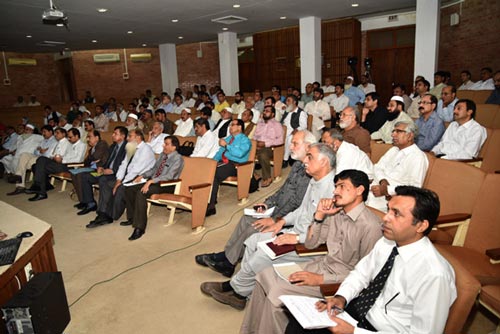 Acknowledging the efforts of WPEP during the inaugural session, Sikander Hayat Khan Bosan, Federal Minister for National Food Security and Research, said that Pakistani farmers have been able to double their wheat yields during the past few years. The USDA, international experts, PARC, and CIMMYT have brought a new development paradigm to Pakistan’s agricultural sector in the form of the WPEP.

PARC Chairman Iftikhar Ahmad commended the efforts of researchers to successfully combat the wheat rust diseases. He also emphasized that policies should be more farmer-friendly so that farmers could make the most of their hard work.

CIMMYT Country Representative Imtiaz Muhammad summarized WPEP’s achievements over the past five years and the support it has provided to improve wheat production. He updated the participants on the rust races that have been identified, including 4 stem rust, 28 yellow rust, and 14 leaf rust races. He assured them that CIMMYT will continue to work towards enhancing wheat production in Pakistan in close partnership with national and international partners.

Farmer representatives from across Pakistan attended the meeting and described the challenges they face, mainly, purchasing quality seed at an affordable price and being able to market their agricultural products. Participants expressed their appreciation for the support of USDA, PARC, and CIMMYT in enhancing wheat production.

A new era for Agricultural Innovation in Pakistan