Farmers of the Yaqui Valley, Sonora State, northern Mexico, and fish in the Sea of Cortez: what ties could they possibly share? Well, if CIMMYT wheat agronomist Iván Ortíz-Monasterio and fellow researchers at Stanford University and Oklahoma State University achieve their aims, both farmers and fish may breathe a little easier.

Ortíz-Monasterio and his partners have been testing and promoting with Yaqui Valley farmers a sensor that measures light reflected from wheat leaves and thereby gauges the health and likely yield of the plants. The device is calibrated to capture red wavelengths, which indicate chlorophyll content, and infrared wavelengths, a measure of biomass. The readings are run through a mathematical model to provide a recommendation about whether or not the crop requires a mid-season application of fertilizer.

Yaqui Valley wheat farmers work large holdings (averaging around 100 hectares), use irrigation and mechanization, and grow improved varieties with fertilizer, fungicides, and other inputs. They typically get excellent yields—on the order of 6 tons per hectare. Despite this, they are feeling squeezed by the rising costs of diesel fuel, water, fertilizer, and other inputs, and many are actually in debt; so they are fervently seeking ways to save money.

Too much of a good thing?

“Farmers here typically apply 230 kilograms of nitrogen per hectare, and 150 kilograms of this goes on 20 days before sowing,” explains Arturo Muñoz Cañez, a consulting agronomist who works a lot of the time with the Asociación de Organismos de Agricultores del Sur de Sonora, an umbrella group that includes seven farmer credit unions serving producers on some 140,000 hectares in the region. “Our studies with Iván have shown that local wheat crops actually use only about one-third of that fertilizer.”

Where does the rest go? Some evaporates into the atmosphere, in the form of nitrous oxide, a notorious greenhouse gas that is nearly 300 times more damaging than carbon dioxide. Another part leaches as nitrate into groundwater, and much of the rest dissolves in run-off irrigation and rainwater, eventually finding its way to the west coast of Sonora and into the sea. There it may fertilize oxygen-hungry algae that can suffocate other marine life and cut into fishermen’s catches.

From Mexico to the world 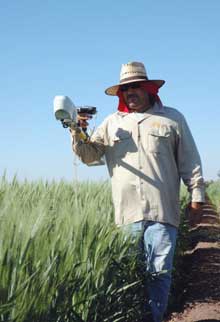 With the help of Ortíz-Monasterio, Muñoz, and other agronomists, Yaqui Valley farmers used the sensor on 174 plots in 2006-07, comparing readings from a fully-fertilized comparison strip with those from the rest of the field at 45 days after sowing—a point at which most important differences in crop development are evident. They then followed the resulting recommendations concerning how much additional fertilizer was needed, if any. In 66% of the cases, the recommendation was to apply nothing more. At harvest, yields from both the fully-fertilized strips and 86 test plots were compared by weighing the grain. “92% of the farmers got good yields—that is, comparable to those of fully-fertilized strips—and on average saved around US$ 75 per hectare in fertilizer they did not apply,” says Muñoz. That’s a US$ 7,500 savings for a 100-hectare farm.

Ortíz-Monasterio attributes the success partly to residual fertility in the local soils, but would like to see eventual adoption of more precise, resource-conserving agricultural practices—including direct seeding without tillage, retaining crop residues on the soil surface, and improved water use efficiency—on at least half of the total 200,000 hectares of the Yaqui and nearby Mayo Valleys. “The Yaqui Valley has been a sort of laboratory for the rest of the world,” says Ortíz-Monasterio, who has worked for several years with researchers in Pakistan to adapt the sensor for the country’s extensive irrigated wheat lands. “A lot of what was first developed here—high-yielding wheat varieties, sowing on raised beds, and now the sensor—has gone on to be used in other wheat farming regions of the developing world. In some ways, what happens here is a reflection of how successful or not CIMMYT is.”

Ortíz-Monasterio is also promoting a lower-cost alternative for farmers who may not be able to work with a sensor: “You simply establish a well-fertilized strip in your field. If the rest of your crop looks comparable in health and development to plants in the strip, then you don’t need to apply more fertilizer. If there is any difference, then you apply what you would normally apply. In this way, we’d help at least half the irrigated wheat farmers in the world.”