In a recent visit to CIMMYT, Dr. Jacques Diouf, Director General of FAO, said the organization was very interested in continuing its partnership with CIMMYT in research to combat Ug99, the new virulent strain of wheat stem rust from eastern Africa, and in working with the center to improve the systems by which seed of improved varieties reaches farmers in developing countries. Diouf and his staff, accompanied by representatives of the FAO in Mexico, spent a halfday at El Batán on 26 October 2008, as part of a longer tour to interact with decision makers and research organizations in the country.

ITAU Director John Dixon said the visitors were quite impressed with what they saw and the opportunities for collaboration. “Coming out of the summit meetings on Ug99 in 2005, FAO has really stepped up to the mark on this issue,” said Dixon. “Other major topics mentioned by Diouf for joint work were seed systems and capacity building.” In his tour of the facilities, Diouf also took special note of research by maize entomologist George Mahuku adapting the use of an IRRI-originated technology—heavy grade, hermetically-sealed plastic bags—for storage of maize grain and seed by small-scale farmers. “Any storage pests in the grain quickly use up available oxygen and die,” said Mahuku. “There’s still lots more testing and adapting to be done, but the practice looks promising.” 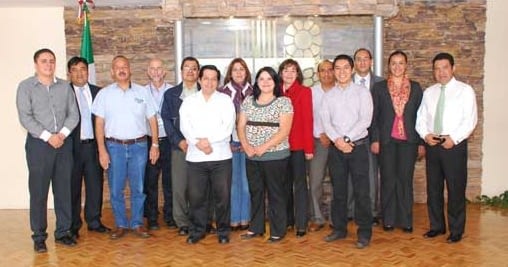