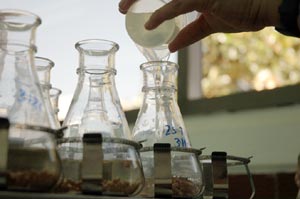 For the past 10 months there has been a little extra edge at the Seed Health Laboratory at the CIMMYT campus in El Batán, Mexico. Everything every researcher and technician did when handling maize and wheat seeds was being scrutinized in the minutest detail by inspection teams from the Mexican Accreditation Entity (EMA) for the ISO. “It was sometimes tense, but I knew our procedures were already at a high level, so I wasn’t really worried,” says Monica Mezzalama, head of SIDU.

The routine shipment and reception of maize and wheat seed samples is the life blood of a global breeding center like CIMMYT. Its crop improvement research means breeding new types of seed that can enhance the livelihoods and food security of farm families in the developing world. You can improve all the seed you want at an experiment station, but eventually you have to ship seed for testing by farmers and national research programs outside of the country where the breeding was done. Also, given that CIMMYT holds the world’s largest collection of maize and wheat germplasm in trust in its genetic resources center, each year it sends hundreds of shipments of seed from those stores to breeders and other researchers from around the world, in response to their requests for samples.

Seed can carry pathogens—viruses, bacteria, or fungi—that reduce the viability of the seed itself or prevent the plants from growing well. When seed is consumed directly as food or feed, seed-borne organisms may cause chemical changes, degrade seed contents, or release powerful toxins that can harm humans and livestock. In the best of cases, food is simply wasted; in the worst, famine or poisoning can result. Certain seed-borne pathogens are endemic to specific areas of the world; great efforts are made to confine them and not allow their spread. 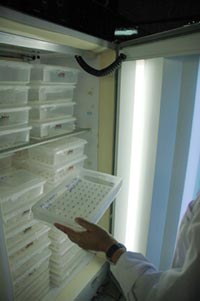 In 1989 CIMMYT established an independent Seed Health Laboratory and in 2004 the seed inspection and distribution unit (SIDU) to handle the inspection and shipment of seed, essentially ensuring that no seed with disease pathogens on board enters the center’s breeding programs or leaves its premises for other destinations. All CGIAR research centers with crop genetic resource collections produce and distribute seed from breeding trials or from their genebanks. All maintain their own, stringent standards and have shared their experiences. Until recently, seed health standards at CIMMYT were self-imposed, in cooperation with the government of Mexico. The implementation of free trade agreements between Mexico and other countries—particularly the USA and Canada—brought a commitment from Mexico to ensure that all seed originating from the country conformed to international norms.

The ISO is the world’s largest developer of standards. ISO standards have important economic and social repercussions, making a positive difference not just to organizations for whom they solve basic problems in production and distribution, but to society as a whole. Mexico adopted ISO standards for seed movement, to be administered by EMA. For CIMMYT it is the ISO/IEC 17025-2005 General requirements for the competence of testing and calibration laboratories. “We knew all along that our seed health procedures were the best,” says Masa Iwanaga, CIMMYT Director General. “But having the toughest outside inspection in the world confirm what we knew is very gratifying, not only for us but for our partners in more than an hundred countries.”

Bidding to Balance Color with Quality