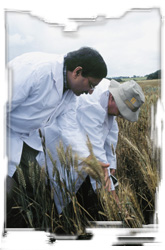 Ravi Singh is a skilled researcher who has dedicated his career to improving the lives of wheat farmers in the developing world. That dedication, commitment, and skill were rewarded by the members of the Consultative Group on International Agricultural Research (CGIAR) when they named him the outstanding scientist in the system for 2005. CIMMYT is one of the CGIAR’s 15 research centers.

Ravi Singh joined CIMMYT as a post-doctoral fellow in 1983. He has specialized in rusts—fungal pathogens that since the beginning of agriculture have plagued wheat crops. Carried on the wind, rust spores respect no political boundaries. Resource-poor wheat farmers, who have no access to chemical controls, are at the highest risk. One solution is to find a genetic characteristic that will prevent the pathogen from causing damage and incorporate it into wheat varieties farmers will grow. Traditionally this host plant resistance has come from a single, major gene. The problem is that the pathogens mutate and can overcome the resistance provided by a single gene in a relatively short time.

Singh’s great contribution has been the development of the underlying theory of genetic resistance mechanisms in wheat. He has been able to breed durable resistance to both leaf rust and yellow rust by combining several minor resistance genes into a single cultivar to give the plant a resistance to the pathogen that will survive many generations, many growing seasons. 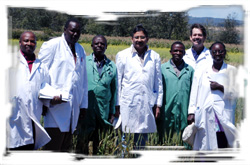 Rust resistance has been one of the most important thrusts of CIMMYT’s wheat breeding work. One study documenting the impact of almost 40 years of breeding for leaf rust at CIMMYT estimated that for every dollar (based on 1990 values) CIMMYT invested, the return to farmers growing spring wheat alone was US$27, for a total of more than US$5.3 billion.

“I’m thrilled for Ravi and thrilled for CIMMYT,” said Dr. Masa Iwanaga, CIMMYT’s Director General. “This award shows once again that scientific excellence combined with a commitment to people in the developing world is a winning combination.”

This is the second time in three years that a CIMMYT researcher has been named the CGIAR’s outstanding scientist. Last year the CIMMYT-convened Rice Wheat Consortium for the Indo-Gangetic Plains won the coveted King Baudouin Award for excellence in agricultural science.

Today Ravi Singh has taken on perhaps the biggest challenge of his career: to find durable resistance for a new, virulent strain of stem rust, the most dreaded of all the wheat diseases. If not contained or controlled, the new stem rust strain could cause billions of dollars of damage every year to wheat crops and immense suffering for resource-poor wheat farmers in the developing world.

“Ravi has been the intellectual linchpin in this research initiative,” says Dr. Ronnie Coffman, the Chair of the Department of Plant Breeding and Genetics at Cornell University. “He is helping scientists in all the essential disciplines and geographies integrate their knowledge and abilities into an effort that I believe will successfully forestall a global stem rust epidemic.”

While the science itself presents a challenge, Singh always has in mind the people for whom he is doing the work. “The issue is how quickly we can put resistance into a cultivar which will be acceptable to farmers in developing countries,” he says. “You feel great when you see that people far away are growing something you developed