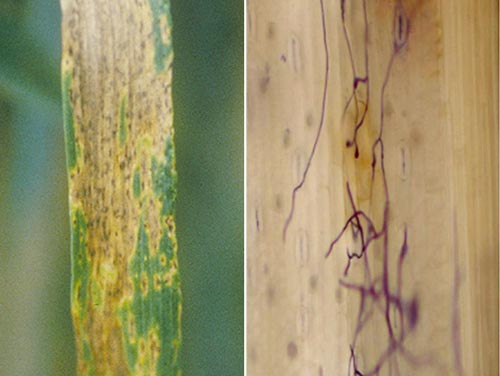 After screening some 500 wheat lines and varieties at 6 sites in Bangladesh, India, and Nepal, a group of scientists were able to identify 35 genotypes that resist spot blotch. This is the number-one disease of wheat in the Eastern Gangetic Plains, seriously damaging the crops of farmers—who are mostly smallholders—on some 9 million hectares.

The results were reported at a meeting of participants in two projects of WHEAT, the CGIAR Research Program on this crop, at Mohanpur Campus of IISER-Kolkata, India, on 24 June 2013. Funded through multi-year competitive grants from WHEAT, the two project are “Deciphering phytohormone signaling in modulation of resistance to spot blotch disease for identification of novel resistance components for wheat improvement,” led by Shree P. Pandey, IISER-Kolkata, and “Spot blotch of wheat: Delivering resistant wheat lines and diagnostic and molecular markers for resistance,” led by Ramesh Chand of Banaras Hindu University, Varanasi. Among other things, participants discussed year-one outcomes and laid plans for the coming crop cycle.

Chand reported on the seedling stage resistance found in the wheat tested. In this type of resistance, the pathogen is present on wheat seedlings for up to 25 days without any infection, exhibiting responses such as lesion mimic and tissue necrosis, which appear to attenuate pathogen effects. The resistance gene Sr2 was also found in most of the resistant seed.

Exciting moments in the meeting were the discussions of biochemical and histo-pathological parameters and their possible integration in the resistance screening. Pandey and his team reported novel research to understand phytohormone signals that regulate wheat’s resistance against Bipolaris sorokiniana–the causal pathogen of spot blotch—and which are synthesized in response to the pathogen’s attack. The IISER group is assembling a dictionary of signaling genes that can serve as genomic tools for resistance breeding in wheat. “Expression of these DNA ‘words’ changes when plants are attacked by the spot blotch pathogen,” said Pandey. “Deciphering this word choice can elucidate the chain of command in plants in to the pathogen, helping breeders to design plants better-equipped with resistance genes.”

Finally, there was a report on the field performance of the 500 lines at two other locations, UBKV Coochbehar and RAU Pusa.

“The partners here submitted separate proposals for the projects,” said Komerell. “This meeting furnishes an example of how WHEAT has encouraged them to collaborate.”