Recent conference gets wheat back on Africa’s map 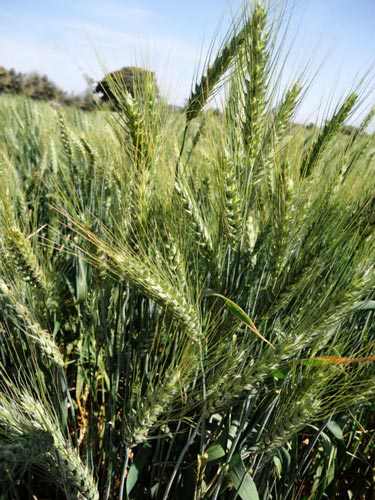 Wheat is increasingly in demand in sub-Saharan Africa as a result of income growth and the demand for convenience foods as more women enter the workplace, but sub-Saharan countries and Africa as a whole produce only about 30% and 40%, respectively, of their domestic requirements, causing a heavy dependence on imports and making the region highly vulnerable to global market and supply shocks.

This was one conclusion reached by some 250 researchers, policymakers, farmer, and seed company representatives who attended the conference “Wheat for food security in Africa: Science and policy dialogue about the future of wheat in Africa,” held in Addis Ababa during 08-12 October 2012. Organized by Ethiopian Institute of Agricultural Research (EIAR), CIMMYT, ICARDA, IFPRI, the African Union, and WHEAT-the CGIAR research program, the event was intended to raise awareness about the potential to grow wheat and reduce the region’s imports of the crop, as well as to discuss policy, institutional, and infrastructure constraints. “In 2012, African countries will spend about US$12 billion to import some 40 million tons of wheat,” said Hans Braun, director of CIMMYT’s global wheat program. “If Africa does not push for wheat self-sufficiency, it could face more hunger, instability and even political violence, as bread riots in North Africa showed in recent years.”

Participants hailed from 23 African nations, as well as from Asia, Europe, and the Americas, and included 4 ministers of agriculture (Burundi, Ethiopia, Sudan, and Zimbabwe) and the directors of national agricultural research programs of 16 countries in Africa. Deemed a great success by participants and organizers, the event and the issues discussed were reported widely in regional and global media, including major outlets such as Nature, New Scientist, Le Monde, BBC Radio, and Deutsche Welle, as well as key wire services like Reuters-Thomson, Associated Press, and Bloomberg. An equally important outcome was the “Addis Declaration” formulated by conference participants and intended to get wheat onto Africa’s policy map as a strategic product for food security, according to Bekele Shiferaw, director of CIMMYT’s socioeconomics program and a co-author of a major report1 on wheat farming in Africa. “Unlocking the potential of wheat will require changes in attitudes, policy and donor support for adapting farming systems, empowering African farmers, and developing value chains for seeds, input supply, and output markets,” Shiferaw said.

The busy four-day agenda included visits to Ethiopia’s premier agricultural research stations at Kulumsa and Debre Zeit. The conference program committee would like to thank all who contributed, but special recognition goes to logistics team of Petr Kosina, Bekele Abeyo, and Dave Hodson. Presentations, publications, media reports, and posters are available on the conference web page.

MLN diagnostics and management in Africa through multi-institutional synergies