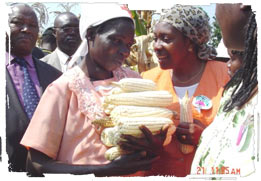 The excitement was palpable—and with good reason. “The last time we saw maize like this was in the 1970s!” said Euniah Akinyi Ogola, holding her freshly harvested maize cobs—each as long as her forearm—as the 5,000 residents of Bar Sauri village in western Kenya celebrated their maize harvest.

Euniah is a villager in the world’s first ‘millennium village’ of the UN’s Millennium Project. The village hopes to show that with modest investment and support, it is entirely possible to pull people out of hunger and poverty and set them on the road to prosperity. One of the first steps in the five-year process is to end hunger by improving the village’s agriculture.

With the drying up of state subsidies for small farmers in the 1980s and changes in agricultural programs in the 1990s, many Kenyan villages suffered a downward spiral in maize production. When the village project started in 2004, most farmers in Sauri were harvesting well under a ton of maize per hectare, insufficient to see a household from one crop to the next. The shortage of maize—the main staple food—coupled with malaria and HIV-Aids, effectively stymied Sauri villagers’ chances for a better life. 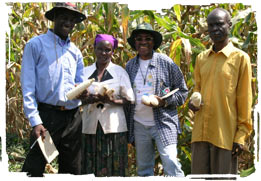 To address the biting hunger Pedro Sanchez, co-chair of the UN Millennium Project Hunger Task Force, and his team introduced two maize hybrids to the village. Planted on all 300 hectares of village, both varieties were developed by CIMMYT’s Africa Maize Stress (AMS) project funded by IFAD, SIDA, BMZ, and the Rockefeller Foundation.

“We were looking for the best maize varieties available in Kenya,” says Sanchez, who did not want to take any chances when selecting the maize for the village. In addition to the new maize seed, the villagers received fertilizer and were shown the proper way to plant and tend their maize. Hard work and good rains completed the picture, leading to a bumper crop of four tons per hectare that astonished the villagers, project staff, and observers worldwide.

At the recent harvest festival, UNICEF Executive Director Anne Veneman and Professor Jeffry Sachs, UN Special Envoy on the millennium development goals (MDGs), both praised the success of the village. Sachs said the project would now work with the villagers to construct safe storage facilities for their current and future harvests and start planting more vegetables and other high-value crops.

Alpha Diallo, leader of the AMS project, says he was thrilled that the CIMMYT varieties met the MDG challenge: “The hybrids are high yielding, but are also able to resist diseases and other environmental stresses, thanks to our targeted, long-term breeding efforts,” he says.