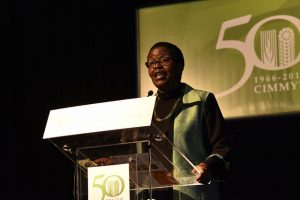 MEXICO CITY (CIMMYT) – The agriculture for development sector must begin “nourishing” families with nutrition-sensitive interventions instead of focusing on “feeding,” said a leading food security expert at a conference in Mexico City hosted by the International Maize and Wheat Improvement Center (CIMMYT), which is celebrating its 50thanniversary.

“We’ve spent a lot of time in the last 50 years in the comfort zone of ‘feeding’,” said Lindiwe Majele Sibanda, chief executive for the Food, Agriculture and Natural Resources Policy Analysis Network (FANRPAN) in southern Africa.

On a panel of experts, which included researchers, policymakers, farmers and the private sector, Sibanda urged almost 1,000 delegates attending the three day conference to consider the potential risks of focusing solely on boosting yields and fortifying grains with micronutrients and vitamin A, rather than developing strategies for increased dietary diversity.

The panel also discussed topics related to agricultural research and development such as food security and nutrition, climate change, the social tensions that are both cause and result of migration, scientific developments and new technologies.

After the first day, a mixture of formal and celebratory activities at the CIMMYT research station in El Batan outside Mexico City, delegates relocated to the city to tackle such wide-ranging topics as nutrition, the newly approved portfolio for the CGIAR system of agricultural researchers to which CIMMYT belongs, funding, scientific developments, new technologies and technical innovations.

We are not yet on the right trajectory when it comes to nutrition and health outcomes, said Juergen Voegele, senior director, agriculture global practice World Bank and CGIAR System Council Chair.

“Without a CGIAR there would be 100 countries in conflict and not the 60 that we know today,” Voegele said. “The CGIAR has a major role to play in ensuring nutrition security and peace and conflict resolution.”

He said that productivity increases achieved in the 1980s and 1990s were ahead of population growth, but are currently lagging behind, leading to the necessity to increase funding for the CGIAR. Currently, for every dollar invested in the CGIAR, the return is $17, in some programs rising up to $100.

“At the current trajectory, we will not solve the world’s food challenges,” he said, adding that recent reforms have contributed much to focusing the efforts of the CGIAR towards the U.N. Sustainable Development Goals, 15 measurable targets aimed at reducing poverty, and reaffirmed the World Bank’s commitment to championing and supporting CGIAR research.

The challenges are vast, said Martin Kropff, CIMMYT’s director general. “We have more people, less land, greater demand, all in the face of climate change.”

A new agreement signed by CIMMYT and agri-seed company Dupont Pioneer at the conference, which will use CRISPR-Cas advanced breeding technologies to develop improved crops by using the best characteristics native to the plant, aims to streamline research into plant breeding and disease.

“It has become abundantly clear that there are at least two essential ingredients to feeding a growing population –innovation and farmers — and we must do a better job of connecting the two,” said Paul Schickler, president of Dupont Pioneer

The technology will be put to use first to challenge Maize Lethal Necrosis disease in sub-Saharan Africa, which first emerged in Kenya in 2011 and affects almost a quarter of total maize production with annual losses of about $110 million and up to 90 percent yield loss on individual farms, Schickler said.

“The public-private partnership allows us to extend such benefits much more rapidly to farmers in low- and middle-income countries, addressing problems they uniquely face, giving them equal opportunities. As a result, we democratize access to new technologies.”

Among many recent scientific advancements, innovative remote sensing and satellite imagery technologies for assessing the effectiveness of research results in the field are increasingly being used.

Scientist David Lobell of Stanford University said that he uses satellite images to estimate which crops are being grown by farmers and the yields they obtain. Jose Luis Araus of the University of Barcelona spoke of a virtual revolution where phenotyping assessments are moving from the ground-based time consuming assessments to much more rapid assessments using drones and airplanes.

Other scientists, such as Ken Giller from the University of Wageningen described his work evaluating farm-level technology adoption.

“The fast-growing population of Africa is pushing down farm sizes, making it less likely that food security can be achieved in the near future,” Giller said. “We need to find new approaches to ensure that the combination of off-farm and on-farm incomes achieve household food security and, more, get farmers out of poverty.”

Mexico’s sub-secretary of agriculture, Jorge Armando Narváez Narváez, was among the many international agriculture experts and government officials who spoke at the conference, emphasizing the need to have reliable and market-oriented agricultural research and development platforms.

The benefits of global agricultural research that made improved hybrid maize seeds and fertilizer available to smallholders in the 1980s were illustrated by development economist and Cornell University Ph.D. graduate Ed Mabaya, who grew up on a hillside maize-livestock farm in rural Zimbabwe.

He recounted a meeting he had with a childhood friend whose fate was to remain in the village, struggling to survive and feed his family.

Mabaya concluded that his parents’ use of improved seed and farming practices derived from agricultural research helped open a pathway out of poverty for his family, with similar experiences for other progressive farmers in the community.

Pushing the boundaries on technological innovation and sustainability must always be first and foremost, said Martin Kropff, director general CIMMYT. 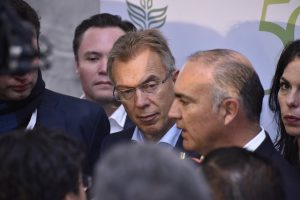