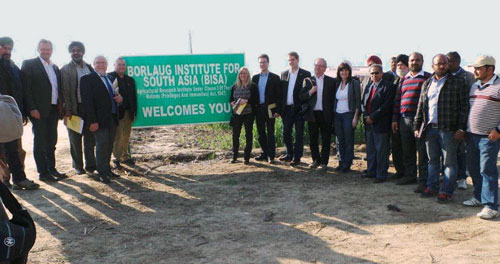 The purpose of the visit was to discuss food security issues in the context of resource degradation and climate change, and BISA’s role in assisting South Asian national agriculture research systems in addressing these challenges. In the beginning, Raj Gupta provided background information on the vision, mission, and partnerships of CIMMYT/BISA with national agriculture research systems. ML Jat then summarized the themes currently covered by BISA activities: (1) research infrastructure and farm development; (2) research on new maize and wheat germplasm, precision conservation agriculture, climate resilient production systems, and farm typology smart mechanization; (3) capacity enhancement through advanced courses, programs for visiting scientists, students, and interns, and exposure visits; and (4) partnerships and networking.

The delegation visited BISA farm and facilities to observe and better understand activities focusing on water table depletion, labor scarcity, residue burning, soil health deterioration, and climate change. The BISA team demonstrated no-till wheat with seven-ton surface residue of Sasbenia planted with front mounted knife roller (developed by BISA) and rear mounted turbo Happy Seeder in a single pass, and explained the advantages of this eco-friendly technology (including time, energy, and cost savings; reduction of environmental pollution; and climate adaptation). The long-term effects of residues on the likelihood of fungal disease manifestation were of particular interest to the German delegation. “There has been no evidence so far showing that keeping residuals might lead to a higher likelihood of diseases in the future,” Gupta addressed the concerns. “However, it will be monitored under the long-term conservation agriculture trials.”

When the delegation noticed a completely damaged winter maize crop on the other side of the fence of the BISA field, they were curious about what happened. “This is a result of severe frost injury, which shows the importance of developing cold tolerant maize germplasm,” explained ML Jat. Abiotic stress tolerant germplasm development is one of the issues on BISA’s agenda.

The visitors also observed BISA efforts on sustainable intensification of the cotton-wheat system, the second most important wheat based system in South Asia. They then discussed the application of pesticides and herbicides, assessment of different irrigation technologies, and crop management systems. Before leaving the BISA site, the delegation visited the new generation precision conservation agriculture machinery developed, adapted, and currently fin-etuned at BISA-Ludhiana. “BISA can play a critical role in smart farm mechanization in South Asia and other parts of the world by creating connections between stakeholders,” commented Er Baldev Singh, president of Agricultural Machinery Manufacturers Association of India.

The members of parliament appreciated HS Sidhu and his team for their work on smart mechanization innovation for smallholder farmers.

The Borlaug Summit on Wheat for Food Security: 27 March