For a month and a half, farmers in Guanajuato shared their experiences with sustainable agriculture.

Work methodologies that promote the development, adaptation, transfer and adoption of sustainable agricultural technologies and practices were shared through social networks and communication channels, which farmers also used to voice their opinions. During the campaign, 7 articles were published in the EnlACe Bulletin, 15 on Facebook that reached 29,067 people, and 40 tweets that were received by 47,821 people. MasAgro Móvil was another way we disseminated information about the campaign, with 7 messages reaching 1,300 people each week.

Marcelino Vázquez, representative of the organization Agro Productores Dobladenses, shared the marketing experiences they had during the 2014-2015 fall-winter cycle. He explained that farmers established the organization in order to improve their production systems and livelihoods, and recognized that working in coordination with SDAyR and MasAgro Guanajuato had been important to the success of the organization.

As a result of their efforts, from 2014 to date, farmers were able to market around 8,000 tons to different companies (Pepsico and flour processors). Despite not having a commercial infrastructure, these types of actions have improved the organization’s production and marketing systems; for this reason, Agro Productores Dobladenses recommends contract agriculture, which is a marketing alternative that allows farmers to get a good price for their harvest. It also ensures they will be able to market a certain volume at a specific price.

As for fertilization, farmers Fernando Castro García and Jesús Morales shared their experiences using soil amendments on sorghum; they used solid fertilizer instead of ammonia. Guanajuatan farmers also shared their experiences in other areas such as machinery, crop rotations and pest management. They also came to a consensus about which cropping practices are most sustainable and profitable.

An outstanding feature of the campaign was that what we shared was the result of discussions held with farmers and other actors (such as technicians, researchers, the industry and institutions), in which a consensus was reached about which practices are best for optimizing productivity, profitability and environmentally friendliness. This allowed us to generate and disseminate local knowledge to modify the dynamics of decision-making and knowledge transfer.

See the messages that we shared during the campaign! Look for the hashtag #LosProductoresRecomiendan on Facebook and Twitter. And don’t forget to call 01 (462) 6226116 if you wish to take part in the MasAgro Guanajuato initiative or send an email to r.barrera@cgiar.org with “Participación en MasAgro Guanajuato” as the subject. 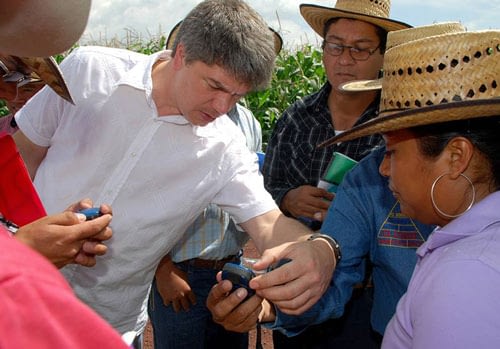 After registering for the service, farmers receive short, simple, timely and free agricultural information on the most innovative and profitable conservation agriculture practices.