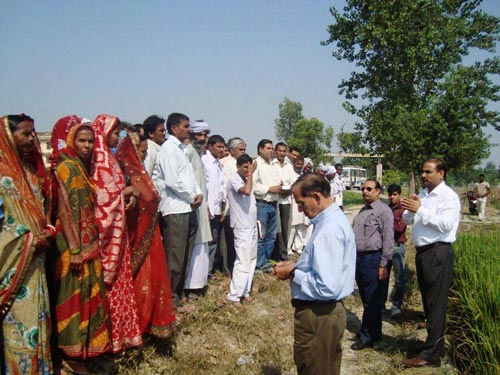 ML Jat (CIMMYT senior cropping systems agronomist) started the seminar with a summary of CCAFS activities, target regions, and priorities for Bihar. He stressed the importance of conservation agriculture (CA) for adaptation, mitigation, and risk management in farming practices in the context of emerging climatic extremes and projected effects of global climate change. In locations like Bihar, with typically uncertain weather, cropping system optimization is crucial for climate change adaptation; this optimization can be facilitated through CA-based management practices.

Jat also discussed the involvement of women farmers in decision making, which is critical not only for risk management but also for women’s empowerment, as it allows them to harness their full potential. Women are generally not involved in the decision making process and they often lack access to information, which prevents them from efficient decision making and full involvement in the farm system. Jat then explained some new nutrient management tools and techniques, such as the Nutrient Expert decision support systems for maize and wheat and the hand-held GreenSeeker sensors. Following the presentation, some farmers expressed their interest to learn about the Nutrient Expert tool in order to provide services to other farmers in their villages.

VP Singh (RAU director of research) highlighted the importance of this experiment: “CA-based crop management technologies are the way forward not only for reducing production cost and improving income but also for enhancing climate resilience and long-term sustainability of farming in Bihar.”

The Government of Bihar reflects Singh’s sentiment, as it has given high priority to CA and promised to provide over 5,000 zero-till planters to the farmers in 2012. Singh urged the farmers to adopt other best management practices as well, including timely planting, improved varieties, nutrient, water, and weed management practices for higher productivity and profitability, and efficient use of input to help mitigate GHG emissions.

In the end of the seminar, an interaction session was organized at a BISA farm where participants discussed key lessons and critical issues. The session included a demonstration of mechanized harvesting of maize using small multi-crop combine harvester.