Following its interaction with the National Seed Association of India (NSAI) and Indian seed businesses during an event organized by CSISA-NP in the first and second week of June, SEAN decided to devise a strategic roadmap and upgrade its organizational strategy. The specific purpose of the July meeting, which was attended by 19 participants from SEAN, 3 from NARC and 4 from CIMMYT-Nepal, was to study SEAN’s vision, mission and goal, and how they could be updated in the current era of globalization, technological innovation and deregulation.

Increasing farmers’ access to quality seed is important for enhancing Nepal’s food security. To this end, CSISA-NP has been helping small and medium seed enterprises accelerate their growth in an integrated manner. To facilitate their growth, the current situation of seed enterprises, the challenges they face and their potential for growth were recently documented, and the outcomes will be presented at the National Seed Summit on 14-15 September 2015. In addition, representatives of 15 Nepali seed enterprises visited Indian seed companies in May 2015 to learn from their experience, and a memorandum of understanding (MoU) was signed between NSAI and SEAN to foster partnership between them.

Speaking on behalf of SEAN, its president, Laxmi Kanta Dhakal, said that to catalyze the implementation of the MoU between their organization and NSAI, SEAN needs to develop appropriate strategies to address its internal issues as well as reshape partnership modes with potential national and international stakeholders.

Initiated in 1989, SEAN was registered in Nepal in 1991 as a non-profit organization and now comprises 500 members, including seed entrepreneurs engaged in producing, processing and marketing seeds and other agricultural inputs. SEAN’s main purpose has been to organize individual entrepreneurs and private companies to foster capacity building, lobbying and advocating on behalf of seed entrepreneurs, thereby strengthening the national seed industry.

At the meeting, Gurbinder Singh Gill gave a lecture on how to develop the strategic roadmap and facilitated the session where SEAN started working on its mission, vision and goal statements. Gill also shared case studies from different countries and organizations to encourage SEAN’s leadership team to start working at the organizational level. Once these themes are discussed and detailed by SEAN at the organizational level, CSISA-NP will hold a workshop to decide on the way forward. This should lead to an implementable strategic plan for the next five or ten years.

Towards the end of the meeting, NARC Director (Crops and Horticulture) Shanbhu Prasad Khatiwada said that strong linkage and coordination between the national research program, SEAN, seed enterprises and the CIMMYT team are needed to achieve comprehensive progress towards solving Nepal’s food security issues. He said that this was the first meeting of its kind in Nepal where SEAN, NARC and CIMMYT came together to reshape the organizational strategy of the only seed association of Nepal.
The event was opened by Arun Joshi, Country Representative of CIMMYT-Nepal, facilitated by CIMMYT consultants Narayan Khanal and Gurbinder Singh, and by K.C. Dilli, Monitoring and Evaluation Specialist, CIMMYT-Nepal. 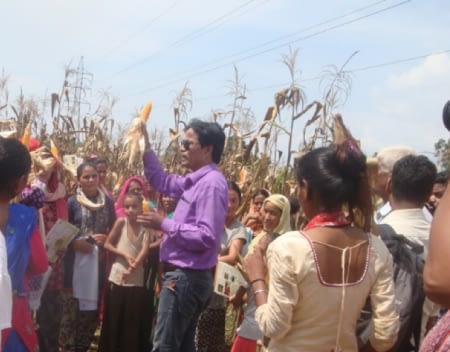