Drought tolerant maize can reduce risks for farmers and allow for more consistent crop production in the face of climate variability in southern Africa.

LUSAKA, Zambia — For 62 year old Margaret Chisangano, life had been full of hard work. She used to rise early morning and carry out her tasks on her small farm – mainly growing maize without access to irrigation.

Chisangano lives in a rural village in Chongwe District of Zambia’s Lusaka Province. Average temperatures and erratic rainfalls in the region have been increasing, making it a daily challenge to feed her five grandchildren.

“Due to the harsh climate, farming was like gambling with nature,” she says. “Relying on the government’s relief food was only a temporary solution that did not solve our larger issues.”

Many farmers like Chisangano in rural Zambia are struggling to maintain their harvests while climate change makes it harder every year to produce a successful harvest. In the face of the drought crippling southern Africa, drought tolerant maize can reduce risks for farmers and allow for more consistent crop production in the face of climate variability. This enables farmers to allocate more land to higher-value crops with better economic returns, improving food security and incomes. 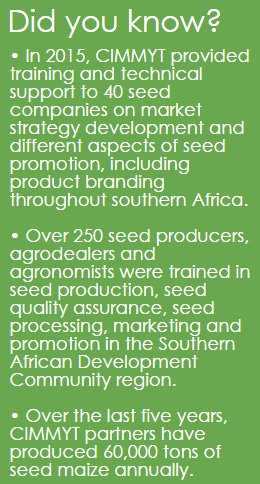 CIMMYT is working to improve access to good-quality maize through production and deployment of affordable and improved drought-tolerant, stress-resilient and high-yielding maize varieties for smallholder farmers throughout Zambia. Kamano Seed Company is one of six seed companies that CIMMYT partners with to improve maize production and marketing for small-scale farmers. The company provides drought-tolerant maize seeds, fertilizers and training to help farmers commercialize their production.

The company also focuses on increasing productivity and market access for farmers to drought-tolerant maize seed, and trains farmers on how to properly apply fertilizer that can help double or quadruple their maize yields.  Many farmers Kamano works with are growing maize commercially for the first time.

Chisangano was one of the first female farmers to join the contract farming project. Like many rural women in Zambia, she had little access to economic opportunities outside of subsistence farming.

To invest in developing agribusinesses, Kamano Seed Company is establishing links with banks to access loans to pay the farmers for their maize seed to avoid side marketing. The smallholder farmers also receive training in business skills, including record keeping, and the basics of contract farming.

Investing in agribusinesses development allows farm families to have a more consistent source of food and income throughout any given year, according to Nokutula Zimba, Kamano Seed Company senior marketing and sales officer. “In the long term, these farming activities help communities withstand future food crises and increase income-earning opportunities.”

Click here to learn more about what CIMMYT is doing to help maize farmers grow their business here.

Led by the International Maize and Wheat Improvement Center, and implemented through in-country public and private partnerships, the Drought-Tolerant Maize for Africa Seed Scaling Project is supported by the United States Agency for International Development and emphasizes the scaling up and scaling out of drought tolerant maize seed and uptake by smallholder farmers. The project aims to produce close to 12,000 metric tons of certified seed for use by approximately 2.5 million people in six countries in eastern and southern Africa by the end of 2020.

Stakeholders in the agricultural sector met in Nairobi, Kenya, for the 4th Annual Food Security Conference (AFSC) on 12-13 October 2016.