CIMMYT is pleased to announce the release of a set of 16 new CIMMYT maize lines (CMLs). These CMLs were developed at various breeding locations of the CIMMYT Global Maize Program by multi-disciplinary teams of scientists in sub-Saharan Africa, Latin America and Asia. These lines are adapted to the tropical and subtropical maize production environments targeted by CIMMYT and partner institutions.

CMLs are available free of charge to both public and private sector breeders worldwide under the standard material transfer agreement.

CIMMYT seeks to develop improved maize inbred lines with superior performance and multiple stress tolerance to improve maize productivity for the resource-constrained smallholder farmers.  To achieve this, CMLs are identified from inbred or doubled-haploid lines after intensive evaluation in hybrid combinations the respective geographies where they are developed, including various abiotic and biotic stresses, as well as suitability as either seed or pollen parent. Release of a CML does not guarantee high combining ability nor high performance per se in all environments: rather, it indicates that the line is promising or useful as a hybrid component or parent for pedigree breeding for one or more target mega-environments. The descriptions of the lines include heterotic group classification, along with information on their specific combining ability with widely used CIMMYT lines.

Of note in the 16 new CMLs are a set of five doubled-haploid lines (CML566-CML570).  These are the first DH-based CMLs to be released by CIMMYT. 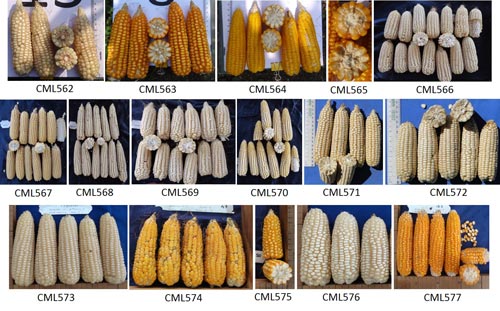 A summary of the 16 new CMLs is presented in a tabular form below. Further details, including the pedigrees of these CMLs, are available at this link.

A limited quantity of seed of the CMLs can be obtained by sending a request to the CIMMYT Germplasm Bank. Contact Denise Costich.

Presently, CML 569 line is only available to partners in East African countries that can receive seed shipments from CIMMYT–Kenya.  This is due to germplasm exchange restrictions imposed to restrict the potential movement of maize lethal necrosis (MLN) disease.  Contact: Mosisa Regasa. However, CML569 will be broadly available through the CIMMYT Germplasm Bank from July 2016.