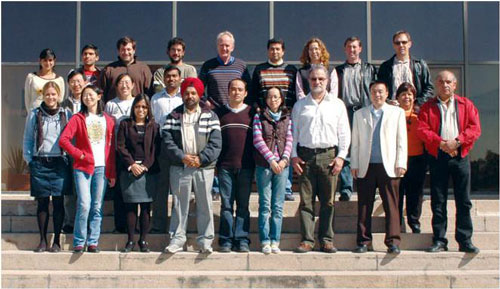 The 7th Workshop on QTL Mapping and Breeding Simulation was held at CIMMYT-El Batán during 20-21 January 2011. The two-day workshop, which explored advanced breeding software and technologies, was free for all CIMMYT and GCP scientists, consultants, students, and interested visitors who were visiting El Batán. Twenty-eight scientists from various CIMMYT programs attended the workshop, kicked off by our DDG Marianne Banziger.

The first day of the course, led by CIMMYT scientist Jiankang Wang, and the Generation Challenge Program scientists Scott Chapman and Mark Dieters, focused on modeling breeding programs to achieve faster genetic gains and more efficiently use known gene information. To achieve this, the participants learned the ins and outs of software programs such as QU-GENE, an investigative platform of quantitative genetics, and QuLine, a breeding simulation tool for inbred line-breeding programs.

QuLine has the potential to simulate most methodologies for developing inbred lines. It has been used to compare different selection strategies, to study the effects on selection of dominance and epistasis, to predict cross performance using known gene information, to optimize marker assisted selection to efficiently pyramid multiple genes, and to investigate the use of identified QTL-marker associations and design-led breeding approaches for improving rice quality, among other things. At the end of the first day, Ravi Singh, wheat scientist, said “I am a strong supporter of simulation to evaluate the potential of new strategies.” And although the software may not be perfect, looking forward, Singh added, “The real value will come when you have known information, and have computer simulations that tell you what crosses to make. Simulation will assist both new breeders and seasoned breeders”.

The second day, led by Wang, focused on QTL mapping. Rapid increase in the availability of fine-scale genetic marker maps has led to the intensive use of QTL mapping in the genetic study of quantitative traits. However, the construction of linkage maps and QTL mapping are two separate steps, no software does both. In 2010, Wang and his team at CAAS implemented map construction in the software QTL IciMapping under the support of GCP and other Chinese projects. This is the only software which integrates linkage map construction and QTL mapping, saving researchers invaluable time when they are using QTL mapping to identify the genes of important traits.

The participants acknowledged the great functionalities and user interfaces of the software. At the end of the second day, Sybil Herrera, CIMMYT associate scientist, said, “It is great that we can construct the genetic linkage map in QTL IciMapping software. Before we needed to use one software to construct the map, and then use another one to do QTL mapping. It took a lot of time to work on the format from map construction software to the format for QTL mapping software.”

The workshop proved a successful example of knowledge sharing and capacity building. At the end of the second day, the participants had a thorough understanding of the addressed software programs and the experts and compiled a list of tips and suggestions to improve breeding simulation tools and the QTL mapping software.

Thank you to all who made this workshop possible!