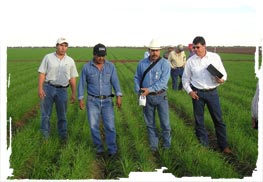 Wheat farmers in the Yaqui Valley of Mexico’s Sonora State will be the first to gain from a new technology developed by CIMMYT researchers with partners from Oklahoma State and Stanford Universities. And while the farmers in Mexico will benefit, CIMMYT believes that farmers and the environment in many developing countries will reap rewards as well.

“I wish I had known about it this season,” said Ruben Luders when he saw the results. He farms 400 hectares of wheat in the Yaqui valley. “It will save me money.”

What Luders and more than twenty-five other farmers saw in a demonstration was an effective and accurate way to determine both the right time and correct amount of nitrogen fertilizer to apply to a growing wheat crop. Wheat needs nitrogen to grow properly, but until now there has been no easy way to know how to apply it in an optimum way. Traditionally farmers in the region fertilize before they plant their seed and then again at the first post-planting irrigation. The new approach, developed in conjunction with Oklahoma State University in the United States, uses an infrared sensor to measure the yield potential of wheat plants as they grow.

“I had been looking for something to determine nitrogen requirements for a long time,” says CIMMYT wheat agronomist, Dr. Ivan Ortiz-Monasterio. “This technology was already being used by CIMMYT scientists for other things, such as estimating the yield of different genotypes. It has taken time to calibrate it, but now we have a useful tool to determine the nitrogen a wheat plant needs.” 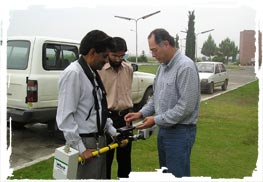 The sensor is held above the young, growing wheat plants and measures how much light is reflected in two different colors—red and invisible infrared. In technical terms this is called measuring the Normalized Differential Vegetative Index (NVDI). After much testing, Ortiz-Monasterio and his colleagues from Oklahoma State found they could get a handheld computer to calculate the nitrogen requirement of the plants from the two readings.

The demonstration, conducted in the fields of four different farmer-volunteers, showed they could maintain their yields using far less fertilizer. That is because fertilizer residue from over-applications in past seasons can still be utilized by the new crop.

“We used to feed the soil first, before growing the wheat,” says Luders. “Now we know we should feed the wheat.” He and his friends calculated that with just 80 hectares of wheat the nitrogen sensor, which costs about US $400, could pay for itself in a single season.

The demonstration was made possible because farmers in the Yaqui Valley have consistently supported the research work of CIMMYT and of Mexico’s national agricultural research institute, INIFAP, in the area.

There is much more to this technology than a tool to maximize farm income. A recent Stanford University study published by the prestigious science journal Nature showed that each time farmers irrigate their fields, some of the excess nitrogen fertilizer washes into the nearby Sea of Cortez. The heavy load of nitrogen in the water results in blooms of algae which deplete the oxygen in the water. In other parts of the world such algae blooms can do serious damage to local fisheries. If widely adopted in the Yaqui Valley, the nitrogen-optimizing technology should result in less fertilizer washing into the sea.

Runoff of excess nitrogen fertilizer is a problem that will threaten many more sensitive bodies of water around the world, according to Ortiz-Monasterio. “As farming systems intensify to feed more people, we need to increase production but minimize impact on the environment,” he says. So while farmers in the State of Sonora may be the first to benefit, they certainly will not be the last. Just five days before the demonstration in Ciudad Obregon, the first infrared sensor, a result of a USAID linkage grant with CIMMYT and Oklahoma State, arrived in Pakistan. This way, a technology proven in the field in Mexico will go on to assist farmers in poorer parts of the world and help maintain the health of coastal waters at the same time.