On 29 April a wheat participatory variety selection (PVS) day in Nepal attracted 50 farmers interested in preventing yield loss due to rusts and other diseases; learning about quality seed production; and raising wheat production and profitability. The event was organized by the Plant Pathology Division of the Nepal Agricultural Research Council (NARC), the National Agricultural Research and Development Fund (NARDF), Nepal’s Ministry of Agriculture and Cooperation, and CIMMYT. The objectives of the day were to 1) generate awareness among farmers for new agronomically superior Ug99 resistant varieties, and 2) involve farmers in the participatory selection of varieties and the planning for the next crop cycle seed dissemination.

The event took place in the village Dhandi in Kathmandu, where there are two mother-baby trials of eight wheat varieties, including newly CIMMYT-developed Ug99 resistant varieties, and the local check WK1204. Sarala Sharma, NARC wheat pathologist and project leader, opened the event with an explanation of the importance of new resistant varieties, especially with the emergence of new rust virulence, such as that of stem rust Ug99. Then, a team of scientists from NARC, CIMMYT, and state extension department officials took farmers around the wheat plots and introduced each variety to the group, detailing the characteristics, qualities, and differences between each one. All the attendees had received an information sheet that included varietal information such as maturity duration, yield potential, and resistance to diseases, and many of the farmer carried these around throughout the presentation to make additional notes. 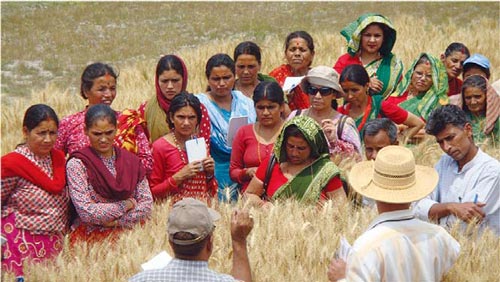 Following the introduction of the varieties, NARC scientists M.R. Bhatta and D.B. Thapa explained the steps involved in participatory selection and farmers were divided into two groups and asked to score wheat varieties in the mother trial according to their own preference. The variety Danphe emerged as the favorite, followed by BL2879 and Francolin. Overall, greater amounts of grain and straw yield, absence of diseases, maturity duration, and grain physical quality were given high preference by farmers.

All farmers expressed a deep interest in growing new varieties in the next crop cycle and said that they expect around a 10% higher yield from the selected varieties compared to the local check WK1204. Several participants wanted to know how long the seed can be maintained without any loss in its characteristics, so CIMMYT wheat breeder Arun Joshi explained the general principles of quality seed production and NARC entomologist S.B. Pradhan explained the principles of safer seed storage.

“I never thought that a variety could be maintained for many years if certain preventive measures were taken to avoid seed mixing,” said Rekha, one of the numerous female farmer attendees. Roughly 90% of event participants were female, and community-based organization of female farmers that work with seed production made up part of the participants.

Overall, the PVS day helped with selection of farmer-identified preferred varieties; improved farmer understanding of the importance of resistant varieties and seed dissemination; the planning new variety promotion for the next crop cycle; and increased interested for further collaboration between farmers, scientists, and development agencies. Similar programs were also organized in 10 other locations in Nepal, some of them in remote areas.