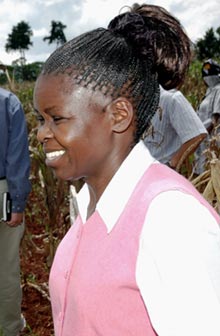 Two years after its release by Western Seed Company, WH502, a hybrid maize variety derived from research by CIMMYT and partners in eastern Africa, was being grown by nearly a fifth of the farmers surveyed in western Kenya for its high yields, resistance to lodging, tolerance to low nitrogen soils, and other good qualities.

Socioeconomist Beatrice Salasya, of the Kenya Agricultural Research Institute (KARI), had heard talk that farmers liked the hybrid WH 502, released by Kenya’s Western Seed Company. So she led a survey in the hybrid’s target region, western Kenya, to assess actual levels of adoption and to help breeders better understand the factors that influence a farmer’s choice to use a new variety or not.

Of the 504 households surveyed, 86—or 17%—had adopted the hybrid, which was derived from experimental maize developed as part of CIMMYT’s Africa Maize Stress (AMS) Project.1 “We found that farmers were growing it; although they were fewer than the talk had suggested,” says Salasya, who published her results in a joint KARI-CIMMYT report.2

According to the report, the households adopting the hybrid were characterized by higher levels of education than those that did not; had larger farm sizes and areas under maize, and had more cattle and land under cash crops, such as sugarcane or coffee. “These results are as expected, because more educated farmers have greater exposure to information about technology and better chances of learning about new varieties,” says Salasya. “Similarly, larger farm size and cattle are proxies for wealth, so that wealthier farmers are able to purchase farm inputs, including seed of improved varieties.”

The survey was conducted in an approximately 100,000-hectare area dominated by smallholder, low-input maize cropping. “In the region where the study was done, most farmers have less than two hectares of land,” says Salasya. Maize yields are very low on average, and harvests typically provide enough grain to meet household needs for no more than six months; thereafter, families must purchase more maize or substitutes. Most farmers grow local varieties and recycle their own seed. Few follow practices to replenish soil nutrients.

The adopters liked the high yields of WH 502, according to the survey, and farmers also felt the hybrid was relatively early maturing, although it is not considered early by the breeders who developed it. “High yield, early maturity, and good storability are the three most commonly mentioned characteristics that households look for in a variety,” Salasya says. The study showed that the hybrid’s perceived advantages include resistance to lodging—that is, falling over in high winds—and tolerance to low nitrogen soil conditions. Finally, though the farmers did not mention these traits, WH 502 is resistant to maize streak virus, one of the most common and damaging diseases of the crop in sub-Saharan Africa, and also tolerates the parasitic weed Striga, which can destroy entire crop stands in western Kenya.

Notwithstanding these valuable traits of the hybrid, there is still more work for breeders, particularly on aspects that farmers identified as needing improvement. “The main characteristics of WH 502 that households did not like were poor storability and poor husk cover,” explains Salasya. Poor storability was mentioned as a weakness by 78% of surveyed farmers, and describes the susceptibility of the hybrid, which has a dent-type kernel, to maize weevil, a major pest of stored grain. The most popular local hybrid, H614, for example, features a harder, flint kernel type that better resists such pests. Poor husk cover was cited by 32% of the respondents, and means that the maize ears will be more prone to rotting, if there are heavy rains just before harvest time.

What actually holds back adoption?

Differing from the weaknesses described above, the key reasons cited by survey respondents for not adopting WH 502 were lack of cash to buy seed (36%) and satisfaction with the variety they were growing or not yet being convinced about the advantages of the new hybrid (41%). Most farmers (69%) who knew about WH 502 had heard about the hybrid from neighbors; underlining the significance of farmer-farmer technology transfer. “It’s also important to note that the time between farmers hearing about WH 502 and adopting it is fairly short,” says Salasya. “For example, 52% of all households interviewed had heard about the hybrid in 2005, the year the survey started. It may be necessary to carry out another adoption study when the hybrid has been with farmers for a longer period.”

The maize with the beans inside: QPM gathers a following in Kenya