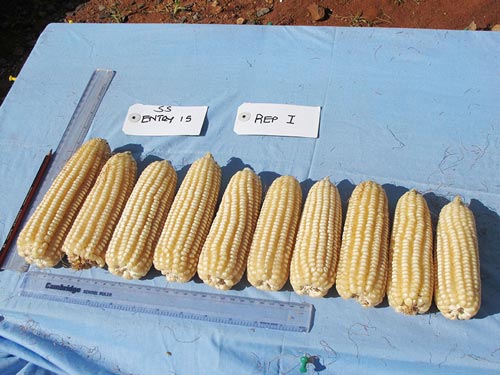 The Water Efficient Maize for Africa (WEMA) project has been conducting field trials of MON87460 since 2010. The most recent trial was planted on 28 November 2012 and harvested on 16 April 2013. Throughout the season, the genetically modified plants outperformed those without the drought-tolerance-enhancing gene, including commercial checks.

This was even more evident at harvest, with ears from the genetically modified plants looking superior to the conventional checks. Charles Kariuki, center director at KARI-Katumani, who was present during the harvesting, was particularly impressed with the performance of the WEMA 18, 36, 41, 50, and 55 entries. “From these, we should be able to generate high quality data to back these impressive performances,” he said. Kariuki urged the project to nominate the conventional entries (without the MON87460 gene), that were also tested in the trials and performed very well, to the Kenya National Performance Trials to fast-track their commercial release. 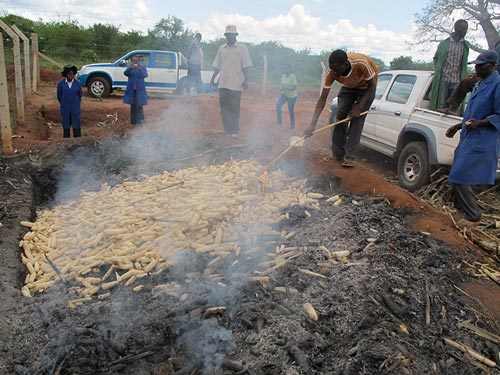 Murenga Mwimali, WEMA’s national coordinator for Kenya, was looking forward to the outcomes of the data analysis to ascertain this yield performance in detail, comparing the performance against those without the gene and the commercial checks: “This will enable us to make informed conclusions on the potential benefits of MON87460.” Representatives from the regulatory authorities—the Kenya National Biosafety Authority (NBA) and the Kenya Plant Health Inspectorate Service (KEPHIS)—also lauded the WEMA team for their good confined field trial management.

The day before the harvest, required training on regulatory compliance was conducted for everyone expected to participate in the harvest. The training covered management requirements and standard operating procedures for confined field trials as well as biosafety requirements for planting, harvesting, and post-harvest monitoring. The 46 participants were drawn from WEMA partner institutions (CIMMYT, African Agricultural Technology Foundation, KARI, and Monsanto), as well as the Ministry of Agriculture, KEPHIS, and NBA.

Jane Otadoh, assistant director for biotechnology in the Ministry of Agriculture, emphasized the importance of training to enable staff to effectively handle confined field trials. “There is lack of awareness, information, and knowledge on biotechnology in Kenya, and more so on confined field trial operations, requirements, and regulations. This training is to help you understand the process, the role of scientists, the regulatory process, and the regulators,” she said. She reiterated the ministry’s support for technology that boosts agricultural productivity.

James Karanja of the KARI-Katumani biotechnology program took participants through the standard operating procedures for harvesting confined field trials. Julia Njagi, biosafety officer at NBA, noted that staff training was critical to ensure compliance with biosafety regulations while performing the trials. As part of confined field trial management and regulatory compliance, all harvested materials including grains had to be destroyed by burning and burying, to avoid unintended release of genetically modified materials into the environment. 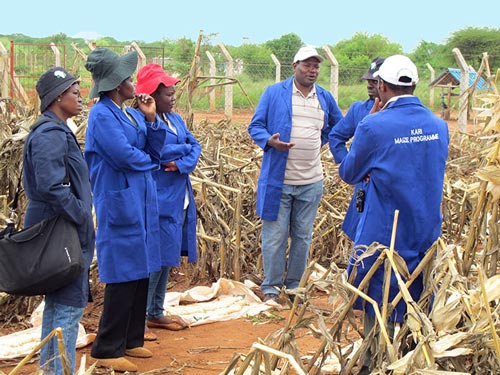 Eveline Shitabule, an inspector with KEPHIS, noted that training helped the participants to understand and follow instructions to ensure compliance. Having competent and well-trained personnel is one of the three pillars of compliance, the other two being a secure facility and records that are accessible and understandable.

Participants said they gained valuable knowledge during the workshop that improved their ability to work on confined field trials.