In Bhutan, maize is one of the most important cereal crops, grown in an area of approximately 77,000 ha, at an altitude ranging from 150 to 3000+ masl. Over 69% of Bhutan’s farming households cultivate maize, producing nearly 77,300 MT. Recognizing the importance of maize to Bhutan, CIMMYT established formal links with the Bhutan maize program through the National Maize Research Program (NMRP), and the Hill Maize Research Program (HMRP), both based in Nepal. Given their similarities in terrain, agro-climatic conditions and socio-economics, it is hoped that technologies developed in Nepal could be suitable for the Bhutanese maize farmers. 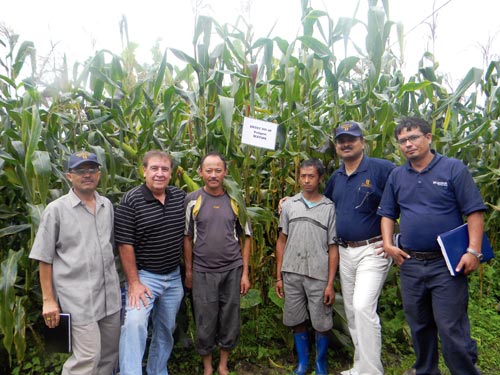 To further strengthen these collaborations, a team of CIMMYT maize scientists, comprising BM Prasanna (Director, Global Maize Program), G Ortiz-Ferrara (Leader, HMRP), and Nirmal Gadal and Dilli KC (HMRP Scientists), visited Bhutan from 09-13 August. The team assessed the progress made in deploying CIMMYT-based maize germplasm with resistance to Gray Leaf Spot (GLS), which has emerged as one of the most important diseases of maize in Bhutan. They also met with senior officials of the Ministry of Agriculture and Forestry (MoAF), the Department of Agriculture (DoA), the Council for Renewable Natural Resources of Bhutan (CoRRB), and visited the Renewable Natural Resources (RNR) Research and Development Centers in Bajothang and Yusipang.

Chencho Norbu , Director of the DoA, and Tashi Samdup, Director of CoRRB, thanked CIMMYT for the collaboration and technical support received since 2001. “The maize research and production [in Bhutan] has been strengthened as a result of this collaboration, and a similar model needs to be followed in other crop commodities, including rice and wheat,” said Norbu. The CIMMYT-led HMRP has provided technical support in terms of improved access to maize germplasm, from CIMMYT (especially from Colombia, Mexico and Zimbabwe) and the NMRP, and through training on disease identification, breeding and seed production.

As a result of these collaborations, two improved open-pollinated varieties of maize — ICAV305 (yellow-grained, GLS-resistant) and S03TLYQAB00 (QPM, GLSresistant)— have been provisionally identified for release in Bhutan this year, which is an important breakthrough following the outbreak of GLS in eastern Bhutan in 2007. The GMP team, together with Tirtha Katwal (National Maize Coordinator) and Sanjay Tshewang (Maize Breeder), also visited Mithun, Tsirang, where the RNR Sub-Center is producing source seed of the candidate maize varieties for release. Approximately 100 tons of foundation seed of the two varieties is expected to be produced by the Mithun and other research stations in the country.

BM Prasanna said that “CIMMYT’s Global Maize Program will continue to strengthen this successful collaboration, and that [they] are pleased to see the two CIMMYT-based maize entries (synthetics) performing so well in the farmers participatory trials [in Bhutan].” He encouraged the Renewable Natural Resources (RNR) maize program of Bhutan to join the International Maize Improvement Consortium (IMIC) for Asia, as it provides a platform for further support and development of maize research through access to improved maize hybrids, and training in germplasm development and testing. The CIMMYT GMP team has also pledged continued support in strengthening maize research and development in Bhutan.