The country, which produced almost 23 million tons of wheat in 2013, has not yet succumbed to Ug99, a swift moving stem rust disease that will be the focus of a workshop expected to attract 500 delegates hosted by the Borlaug Global Rust Initiative (BGRI) in Sydney, Australia, from September 17 to 20, 2015.

Since 1998, Ug99 has been sweeping its way across Africa to the Middle East from its origin in Uganda. Altogether 11 confirmed races in the Ug99 lineage have been detected in Ethiopia, Eritrea, Iran, Kenya, Mozambique, Rwanda, South Africa, Sudan, Tanzania, Uganda, Yemen and Zimbabwe, showing that the pathogen has evolved and expanded widely, according to new research. Most recently, the disease, which reduces grain to useless papery chaff, was detected in Egypt, the country announced earlier this year.

Although significant progress to combat the disease has been made over the past 10 years, the pathogen has continued to evolve and migrate to new areas,” said Hans Braun, head of the Global Wheat Program at the Mexico-based International Maize and Wheat Improvement Center (CIMMYT) and the CGIAR Research Program on Wheat.

“Scientific research has shown that 35 race-specific stem-rust resistance genes have been ineffective against Ug99. On a more positive note, we’ve discovered that at least 38 genes can confer moderate to adequate resistance, indicating that we need to do further research to really keep this disease in check,” said Ravi Singh, head of CIMMYT’s spring wheat breeding program.

As a measure of the level of global concern over the disease, insurance market Lloyd’s of London cited Ug99 as a major incentive to develop new crop varieties in a 2013 report on threats to global food security, which the insurer said would become one of the largest risks to global society over the next 10 years.

While milder variants of rust diseases can often be kept in check on a national level through such measures as monitoring and use of fungicides, the main deterrent involves farmers slowly replacing susceptible wheat with resistant varieties.

“Ug99 poses a real challenge because it has taken hold in the developing world and it’s leaping across international borders at an alarming pace,” Braun said. “Ug99 is extremely difficult to wipe out. The migration of the disease indicates it’s widespread and can affect wheat production and food security on a global scale. No wheat-growing nation is safe – all governments must unite to invest resources to tackle it.”

CIMMYT scientists have devised a strategy, which combines minor genes for resistance to wheat rust diseases, including Ug99, through a Mexico-Kenya shuttle-breeding program and modern molecular tools. The shuttle-breeding program between Mexico and the east African highlands, which produces two generations of wheat a year, has accelerated the process of selecting rust-resistant and high-yielding wheat germplasm suited to the range of wheat-growing environments in Africa, Asia and Latin America.

“Crop diseases do not respect international boundaries,” said Ronnie Coffman, director of international programs at Cornell University who serves as vice-chair of the BGRI. “The focus of the global Ug99 research team is far broader than Ug99 alone, however. Wheat farmers the world over are threatened by outbreaks of new races of yellow and stem rust of wheat on an almost yearly basis. Our primary goal is to secure the world’s wheat crop and make poor wheat farmers less vulnerable to crop diseases.”

By 2050, the current global population of 7.3 billion is projected to grow 33 percent to 9.7 billion, according to the United Nations. Demand for food, driven by population, demographic changes and increasing global wealth will rise more than 60 percent, according to a recent report from the Taskforce on Extreme Weather and Global Food System Resilience. Wheat currently provides 20 percent of calories and 20 percent of protein to the global human diet. 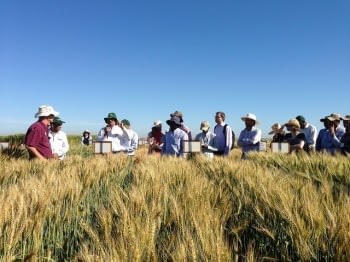 Food shortages will escalate due to climate-change related production shocks and the international community must prepare to respond to price increases and social unrest.